It’s incredible, really. Just when all seemed strangely quiet in the long-running saga of collapsed poker room Full Tilt Poker, along comes a whole bunch of developments that make for exciting reading. 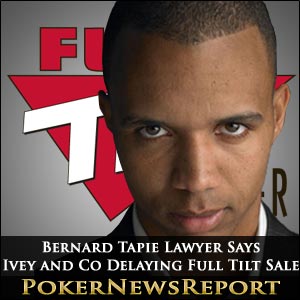 It’s incredible, really. Just when all seemed strangely quiet in the long-running saga of collapsed poker room Full Tilt Poker, along comes a whole bunch of developments that make for exciting reading.

And this latest revelation could well see the seemingly never-ending tale of the fraught Full Tilt and longed-for saviours Groupe Bernard Tapie’s resurrection of the poker website extend beyond the next four weeks.

Little more than a few hours after news that the French investment company expect to clinch the deal to purchase Full Tilt from the US Department of Justice (DoJ) for an estimated $80 million by the end of this month, GBT lawyer Behnam Dayanim revealed to independent online gaming journal Gaming Intelligence that a number of big-name poker pros, including Phil Ivey, are causing problems with that sale.

The Washington, DC-based solicitor claims he has not made “a lot of progress” in his efforts to persuade players such as Barry Greenstein, Mike ‘The Mouth’ Matusow, Erick Lindgren, David Benyamine and Ivey – who have 16 World Series of Poker (WSOP) bracelets between them – to repay debts owed to Full Tilt, therefore stretching out the allegedly imminent deal even further.

He added that, so far, with few exceptions, “none have expressed a willingness to resolve the matter”.

While he made these claims, Dayanim wasn’t quite as specific with the details surrounding the exact amounts owed by the previously-mentioned star-studded quintet, as well as many other players, only saying that it was somewhere between $10 million and $20 million.

It’s quite a disclosure, with the missing money only being tracked down as GPT carried out – as managing director Laurent Tapie revealed to iGaming France – “due diligence” in their efforts to complete the deal before this month is out by discovering additional information regarding the financial circumstances of Full Tilt.

Somewhat unfortunately – or maybe fortuitously, depending on how you look at it – Tapie added the caveat of, wait for it, “unless there are last-minute surprises”.

Oh well. That’s poker for you, huh. Just when you think you’ve got a hand won, the river comes along and smacks you down again (although this might still be the turn, the way this sale is dragging on).

Anyway, Dayanim says the information-gathering process exposed that “the financial position is worse than” had been expected, but also added that, as GBT have no intention of litigating “a whole bunch of individual cases against professionals” once Full Tilt’s sale has been rubber-stamped, they are “trying to negotiate but have not been making a lot of progress”.

The solicitor did, however, admit that the rediscovered money “is not the only issue…holding up the sale”, although he did stress that “it’s a significant one” and that without resolution “it’s difficult to see a path forward to completion”.

Significantly, Dayanim also underlined the fact that the sale is not a done deal yet, with the diligence process still progressing before GBT will “then have to make a go or no-go decision – and we’ll see where we are on the issue at that point”.

Those might appear to be some hugely significant statements from Dayanim, but let’s not forget that any deal – particularly when government departments are involved – can hit the rail at any point.

That is one helluva line-up, if they are all revealed to owe money to the seriously broke poker room, of course. There will undoubtedly be more news to come on that issue.

Dayanim also admitted that Full Tilt have “greater liabilities – excluding player liabilities – than we had hoped”, while stressing that that “the forfeiture would extinguish any US claims to the assets”, although not necessarily ending “creditor claims in other countries”.

Phew! It’s all a bit crazy, don’t you reckon, as we discover more and more eye-opening details of Full Tilt’s recent past.

I really wouldn’t be surprised to see this sale hit a few more buffers before finally being approved – even though GPT sources have emphasised that they expect the deal with the DoJ to beat the deadline date of February 29.

If all that wasn’t enough, US Federal Judge Leonard B Sand also dismissed the class action complaint registered by four poker pros against Full Tilt that would have seen players’ funds returned and damages paid by FTP, so completing a trio of notable new chapters in the poker room’s soon-to-be legendary tale.