Groupe Bernard Tapie had signed an exclusive agreement with the Board of Directors of Full Tilt Poker to acquire the company and all of its associated assets. 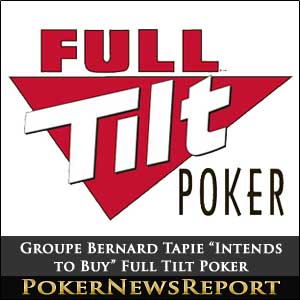 A ray of hope emerged for the beleaguered online poker site – Full Tilt Poker -on Friday, when it has revealed that Groupe Bernard Tapie had signed an exclusive agreement with the Board of Directors of Full Tilt Poker to acquire the company and all of its associated assets.

The announcement, which was made just a day after the Alderney Gambling Commission had revoked Full Tilt Poker´s operating licence, was made in Dublin by CEO of the French investment company, Laurent Tapie.

The agreement to take over Full Tilt Poker is subject to a number of conditions – the primary one being a successful resolution with the United States Department of Justice (DoJ) with whom representatives of Groupe Bernard Tapie are meeting this week. Groupe Bernard Tapie are hoping that the DoJ will agree to paying back the players´ bankrolls misappropriated by Full Tilt Poker from the $331 million seized by the Justice Department and FBI over the past four years and allow the company to pay any fines which are imposed on the company over a period of time.

A Mixed Reaction to the News

Poker players throughout the world displayed a mixed range of emotions at the news. Although most “RoW” players were relieved that there was the chance of getting their bankrolls back, many stated that they would wait and see what incentives were offered to continue playing on the site. Ex-players in the States are unlikely to have that choice, as it is improbable that Full Tilt Poker will be allowed to immediately resume operations in the USA – even when legislation is passed to enable it. Speaking in an interview after the announcement was made, Laurent Tapie stated that if all went to plan, Full Tilt Poker could be operational again by January 2012 – so it is not a decision that players will have to make for another three months.

A Potential Saviour or From Bad to Worse

Reaction was also mixed over the background of the Groupe Bernard Tapie, as Bernard Tapie – father of Laurent – has led a chequered past in France. Although being hailed as the saviour of sportswear brand Adidas and overseer of soccer team Olimpique de Marseilles during the most successful period of their history, Bernard Tapie spent time in prison for match-fixing and was prosecuted (and eventually bankrupted) for tax evasion, tax fraud and false accounting – although this was widely believed to be politically motivated by the French socialist government.

Full Tilt Will Keep Its Name

According to Laurent Tapie, there is no intention to change the Full Tilt Poker branding despite its recent history. He confirmed in an interview that “The brand is not in question, it’s a well-known brand and the technology is widely recognized as being possibly the best in the industry. The management of the company is being questioned and it will be changed (should the takeover be concluded). I believe we have the tools necessary to once again make the site one of the leaders in the online poker sector.”