Grospellier has ended Mercier’s record-setting stay at the top of the GPI 300 at 11 weeks – after two brilliant High Roller cashes to take over as number one. 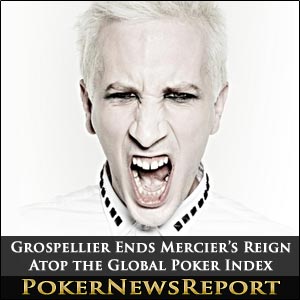 French superstar Bertrand ‘ElkY’ Grospellier has ended Jason Mercier’s record-setting stay at the top of the Global Poker Index (GPI) 300 at 11 weeks – with the Triple Crown winner recording two brilliant High Roller cashes in Europe to take over as number one on the rankings.

Of course, with results coming in from Berlin, as well as seven big buy-in tournaments closing in Monte Carlo and the World Poker Tour (WPT) Seminole Hard Rock $10,000 buy-in No-Limit Hold’em main event reporting, there has been lots of movement inside the GPI – although not much within the top 10, strangely enough.

The result is nine pros inside the top 20 adding new results to their Period 1 scores, while a huge 21 players fall out of the top 300.

Apart from Team PokerStars Pros Grospellier and Mercier switching places, the other most notable change was Swede Martin Jacobson’s climb of nine spots into ninth place on 2,298.84 points.

Jacobson – who was initially ranked at 57th when the GPI debuted back in June of last year – had been as high as 11th in the rankings on September 19 and has remained in the top 50 since to now reach a new high with his first top 10 appearance.

However, Toronto’s Mizzi is now only just 2.56 points ahead of fourth-placed Ukrainian Team PokerStars Pro Eugene Katchalov (2,551.10), who also holds on to his previous ranking.

Eight-time World Series of Poker (WSOP) champ Erik Seidel staged something of a recovery on this latest GPI, climbing back up 15 spots into 12th after his dramatic fall from grace over the past few weeks.

The Las Vegas pro – who had stayed inside the top 10 for months, mostly as number one – saw his ranking slip from sixth in mid-April to his lowest spot of 27th on the last list, but has now recovered some ground after picking up $33,006 for finishing 46th in the EPT Grand Final main event.

The 52-year-old – who enjoyed an incredible 2011 – had struggled recently, failing to add any new scores this year to have no results counting towards Period 1. In fact, his last live tournament in-the-money finish came back in mid-October, when he took 21st for $49,427 in the €10,000 buy-in No-Limit Hold’em main event at the WSOP Europe in Cannes.

Brooklyn’s Team PokerStars Pro Vanessa Selbst also returned to the top 20, gaining three spots to now be at 18th on 2,190.06. However, with two new names in the top 20, two had to drop out – and they are French Team Everest Pro Fabrice Soulier and New Jersey’s Chris Klodnicki.

Fabrice Soulier Drops Down to 21st

Soulier lost 84 points with the San Remo event ageing, while that very drop also hit his Period 3 score as the Frenchman’s 64th place for $11,899 at the EPT Prague €5,000 buy-in No-Limit Hold’em main event December from 2010 has been excluded due to the capping system as it is a lower scoring event than the San Remo result.

In total, Soulier lost 160 points after his sixth place for $8,948 at the Megazon Poker Million No.2 in El Jadida, Morocco, was excluded from Period 5 because of his success at the 2010 EPT Grand Final main event ageing into that cetegory.

The American saw his seventh place finish for $68,465 at the WPT World Poker Finals $9,700 buy-in No-Limit Hold’em main event in Mashantucket from last November age into Period 2 to cost him 71 points, while his 15th for $32,305 in the WSOP Circuit Hammond $10,000 buy-in No-Limit Hold’em Regional Championships from October of 2010 aged into Period 4 to see another 47 points lost.

Returning to the big climbers on this latest list, Monte Carlo provided numerous big buy-in events at the EPT Grand Final to see some massive moves up the rankings.

Illinois’ Charania dropped out of the rankings on December 19, but returned in February, before now hitting his highest mark with his first appearance inside the top 50.

John Paul Kelly Up At 30th

But it wasn’t just European results that enlivened the rankings, with New York’s Tommy Vedes securing the WPT Seminole Hard Rock Showdown main event for $779,520 to rise 99 spots into 47th on 1,778.26 for his best position yet – when adding the second largest score among players of 425 points.

Returning to the tiny European principality, results from the Grand Final’s main event provided the points required for the majority of players bouncing back into the top 300.

Vegas pro Justin Bonomo – who had not been ranked since March 19 – returned at an incredible 74th place on 1,612.20 points after his stellar display in Europe.

He took 28th place for $46,209 in the main event and fourth for $351,188 in the €25,000 buy-in No-Limit Hold’em High Roller. But it was his victory from the Super High Roller tournament for $2,165,217 that truly sent him charging back into the rankings. Expect Bonomo to climb even higher on the next list as that High Roller result won’t be added to his Period 1 score until then.

John Andress Back at 151st

While the American was the only returning player to break into the top 100, other EPT Grand Final main event cashers did show impressive movement, with Pennsylvania’s John Andress leading the way with $52,810 in 24th place to take 151st on 1,350.24 points.

Hoyt Corkins Tumbles Down to 206th

Alabama’s Hoyt Corkins suffered the second biggest fall as he tumbled 74 places into 206th on 1,201.36 points after his most recent score – 10th place at the WPT World Poker Finals main event for $34,676 last November 1 – dropped into Period 2 to leave him without a score in Period 1.

Noah Schwartz Could Climb Into Top 10

The next GPI 300 should see some more significant changes, with the High Roller in Monte Carlo being applied to players’ scores. Expect to see Florida’s Noah Schwartz – who is currently ranked 15th on 2,214.88 points – move up, possibly into the top 10, after his sixth place for $219,162, while Toronto’s Team PokerStars Pro Daniel Negreanu (1,800.59) will definitely improve on his 43rd position following his runner-up finish for $790,304.

Bonomo, meanwhile, will also climb the rankings after capping a wonderful stay in Monaco with his fourth-place finish – ensuring that the American will charge into the top 60 after not even being ranked two weeks ago.