Bertrand Grospellier can’t wait to get back for more when the fourth annual PokerStars Spring Championship of Online Poker (SCOOP) gets underway on Sunday. 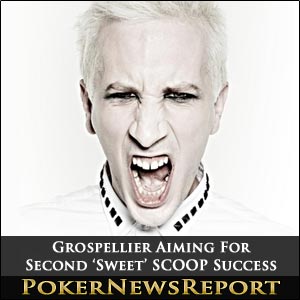 French poker star Bertrand ‘ElkY’ Grospellier can’t wait to get back for more when the fourth annual PokerStars Spring Championship of Online Poker (SCOOP) gets underway on Sunday.

There is also a fair chance any of you signed up to play in one of the many events on offer between May 6 and 20 will encounter the Team PokerStars Pro as he is preparing for a marathon few weeks by competing in all 120 tournaments!

The London-based 31-year-old is determined to add at least one more SCOOP title to his first from last year, when he bested a nine-player field to take down the $25,500 buy-in No-Limit Hold’em Heads-Up event for $112,500 – and, if that means playing in every single one of the tournaments being staged, he is more than happy to do that.

French Star Is Right On Form

Grospellier – who also has two World Championship of Online Poker (WCOOP) titles to his name from 2009 – only recently won the European Poker Tour (EPT) Berlin €10,000 buy-in No-Limit Hold’em Eight-Max Re-Entry event for $301,992 and also took third in the EPT Grand Final €100,000 buy-in Super High Roller in Monte Carlo for $819,878, so is certainly finding his form at the right time.

The Triple Crown winner – who is likely to move atop the Global Poker Index (GPI) 300 this week – wrote about his hopes for this year’s SCOOP, saying that he felt exceptionally blessed when securing the SCOOP title that was missing from his packed list of successes.

Grospellier continued by emphasising that he is definitely coming back for more this year, partly because he finds it difficult to get into a good online routine as a result of his many trips overseas to play in big live events like EPTs, FPS and others.

‘ElkY’ Preparing to Play in All 120 Events

Therefore, the former pro gamer considers SCOOP events to be the perfect opportunity to improve his online poker skills, so will play all of them at every buy-in in order to get that second title.

He also expects the series to have bigger numbers than last year, although he considers that to be all the fun of it… and it will make it taste even sweeter if I succeed.

Grospellier, who won last year’s World Series of Poker (WSOP) $10,000 buy-in Seven-Card Stud Championship for $331,639 to complete his Triple Crown, also says he enjoys taking part in SCOOP because the events format allow him to play for three different buy-ins, which regularly results in him playing three different styles of poker inside of one event.

The fabulous Frenchman, however, pointed out that he often finds himself focused on the high buy-in tournaments, where I’m usually matched up against players I know much better, with that familiarity meaning there is a lot of meta-game, deep-level thinking going on.

As an example, Grospellier pointed to his SCOOP victory last year, when he overcame Jonathan ‘Iftarii’ Jaffe for the title, stressing that he had played countless heads-up hands against the Canadian a few years back when attempting to become the first SuperNova Elite member on PokerStars.

Therefore, he believes that their SCOOP meeting ensured that it was a completely different thing than playing someone for the first time, although he also admitted that he got very lucky in the final hand of that head-to-head with Jaffe when going all-in with a king-high flush draw versus his ace-high flush draw on the flop as he then hit the king on turn and it held.

Remaining modest about his prospects for this staging of SCOOP, Grospellier added that he is certain it will be harder this year to win a title.

So, if you are also considering a full-on grind during SCOOP, it is certain Grospellier will be happy to see you… but only if you don’t stop him from winning a second crown.

Meanwhile, PokerStars have decided to mark this year’s SCOOP by providing customers with a reload bonus of 50% up to a maximum of $250. To collect the bonus, players just have to deposit cash using bonus code ‘MAX250’ before Thursday is out.

This bonus could certainly come in handy for many grinders ahead of the festival, which will guarantee a minimum of $30 million in prizes over the 40 events that offer buy-ins at low, medium and high to surely suit all bankrolls.