Michael “The Grinder” Mizrachi sent a Tweet out yesterday to remind followers of the forthcoming ISPT Day 1A taking place on Lock Poker – and got the day wrong! 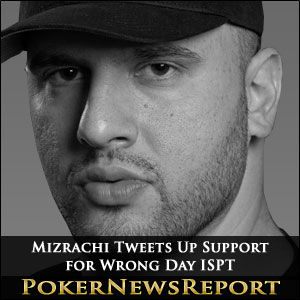 Michael “The Grinder” Mizrachi sent a Tweet out yesterday to remind followers of the forthcoming ISPT Day 1A taking place on Lock Poker – and got the day wrong!

The message sent to his 40,000+ plus followers on Twitter read Feb 9 Day1A for @ispt_poker Download & and Sign Up on GrindonLock. Your chance to win Millions at Wembley stadium in London June 1 is day 2! Unfortunately (for the Grinder at least), Lock Poker are not hosting the first of their ISPT online Day 1s until Sunday 10th Feb.

The Lock Poker pro and ISPT ambassador could not even blame jet-lag for his error as he landed in South Africa to compete in the WSOP Africa Main Event, as the tweet sent out from his “grindonlock” Twitter account was a re-tweet of one he himself sent on Monday – while he was still in Los Angeles waiting to board his plane.

For interested parties, the first of Lock Poker´s six online Day 1s is scheduled to start on Sunday at 9.00pm GMT and will offer the opportunity for the top 10% of players to take their stacks to the live ISPT Day 2 at Wembley Stadium on June 1st. A super-satellite is scheduled one hour before the $400.00 + $20.00 buy-in tournament, which will have a 1 hour late registration period in order to allow satellite qualifiers to take their seats.

ISPT organisers will be hoping that the first online Day 1 open to all players of all nationalities will get a better response than the French-only Day 1A played out last weekend. Only 130 players entered the ISPT online Day 1A played on MyPok.fr last Sunday; with only 5 of the 13 who made it through to Day 2 taking a stack larger than 50,000 chips – the amount of chips players who buy-in directly to Day 2 will receive.

Maybe Saturday Would Have Been a Better Idea!

With only one player entered to date for Lock Poker´s ISPT Online Day 1A, and a schedule clash with the final Irish Poker Open qualifier (5 players already registered) and Lock Poker´s own $100K Sunday feature (23 players currently registered), maybe Mizrachi´s mistake was a hint to the schedule organisers that they should have better considered the placement of the online Day 1s.

The last minute changes, the disappearing guarantees and the complete guesswork about how many players will attend the event by those representing the International Stadiums Poker Tour have seriously damaged the credibility of what could have been an extraordinary event. Maybe Lock Poker´s first ISPT online Day 1 will go some way to restoring faith in the event to those who matter most – the players!