As the two Day Ones of the PokerStars Caribbean Adventure Main Event come together, high-stakes online player Ashton Griffin ( #arfarfhowl) leads the field. 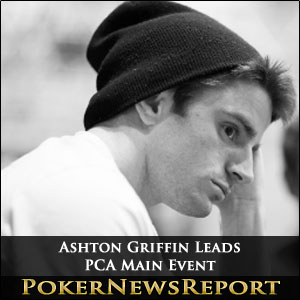 As the two Day Ones of the PokerStars Caribbean Adventure Main Event come together, high-stakes online player Ashton “theASHMAN103” Griffin leads the field.

Ashton Griffin has previously admitted in his blog that bankroll management problems, tilt issues and degenerate tendencies has cost him plenty in the past, but yesterday the 24-year-old from Florida held it all together to top a list of superstar poker players still alive in the PokerStars Caribbean Adventure Main Event.

The turn 6♣ gave Ivey his club flush and it looked as if he was going to be elevated into the chip lead (at the time), but the 5♥ on the river gave Crowe a full house and will see Ivey nursing his last 6 big blinds when play resumes at the Atlantis Resort today.

Just before the action started on Day 1B of the PokerStars PCA Main Event, it was announced that Jake Cody was the latest addition to Team PokerStars. The 24-year-old Triple Crown winner was was warmly welcomed to the event and “patched up” by Team PokerStars Pro Daniel Negreanu before completing his first day on the “team” with 84,400 chips (Negreanu has 11,500 left).

Other famous faces to appear on Day 1B of the PokerStars PCA Main Event included 18 times Olympic gold medallist Michael Phelps – who played quite aggressively to conclude the day with 92,000 chips – and Jason Alexander, who plays George Costanza in the US sitcom “Seinfeld”, but who did not enjoy such a profitable day – busting out of the tournament before the dinner break.