Grey Markets In Dismay! Who Is The Next Target?

In the online poker industry, grey is the new black. 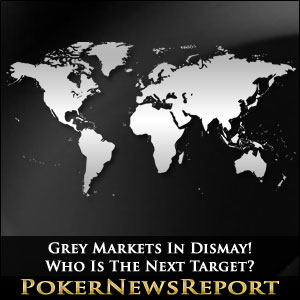 In the online poker industry, grey is the new black.

Amaya Gaming’s decision to leave the so-called grey markets started an unprecedented wave in the online gambling world. Now it’s time for the other operators to stand up, wave their arms and shout. And who is in a better position to do that than PokerStars and Full Tilt’s ‘half-brother’, the OnGame Poker Network?

Many others could fill Amaya’s blacklist in the near future as the company is currently trying to enter the regulated U.S. market. To do so, Amaya will have to become more transparent business-wise and operate only in countries with a clear and up-to-date gambling legislation.

So far, not that many markets have such a legislation. There are still some EU countries left like Germany, Poland, and Romania where the online gambling operations are ‘shady’ and borderline legal-wise if not illegal.

In Romania for example, it is illegal to participate in any gambling activities organized by unlicensed operators. Since no worldwide gambling operator holds such a license, playing poker online is basically a crime punishable by imprisonment.

Already the bookmaker and iPoker skin bet365 is on the verge of leaving the Romanian market after announcing that they won’t accept any new customers from this particular country:

We are currently carrying out a review of our Romania operation. We are in the process of reviewing our position in Romania and have decided not to accept new customers who are resident in Romania at this time.

The newly-formed Romanian Poker Players’ Association is lobbying for reform of the gambling law and the elimination of the players’ taxation. Holdem.ro admin Mihai Manoila commonly known as ‘mehigh’ on the forums and founder of the association told PokerNewsReport:

There is a big problem with the online operators who defy the national gambling commission and force it to take drastic measures, instead of being cooperative. There are operators that had even national TV ads and sent to the commission unbelievable replies such as ’You know, we don’t operate in Romania and we don’t have any representatives there.’

He added that, according to the commission, only ONE operator has really been interested in getting a license, in the last several years. The rest of them are represented by big law firms that constantly tell them what they like to hear (as in preserving the status quo).

The situation in Asia is somewhere similar to the grey zones in Europe. Countries like China and India could be the next targets after Amaya ditched 18 Asian unregulated markets.

However, to do so, the online gambling operators would have to give up a decent portion of their revenue. For operator bet365, leaving markets such as China could be a recipe for disaster.

According to the Guardian, only half of the £1.3 billion the company won from gamblers in 2013 came from the regulated markets. From the perspective of the Chinese law, online and land-based gambling is illegal. Michael Tan, senior counsel based in Shanghai said:

But it is hardly enforceable since the operator might be beyond the jurisdiction of China. So far, China does not have treaties with most western countries, and to extradite is difficult in practice.

Still, for the China-based gamblers and poker players, the law is enforceable and can even lead to imprisonment like in the case of the four bet365 customers in Jiangxi province or the case of two men in Zhejiang who promoted the operator on their blog.

There is no legislation that expressly prohibits the supply of remote gambling services into China by operators who are based outside China. Bet365 has no people, assets or infrastructure in China and does not engage any agent, aggregators or intermediaries, for any purpose, in China. In the view of bet365 and its lawyers, Chinese law does not extend to the provision of services into China by gambling operators and service providers who themselves have no nexus with the territory. Any allegation of illegality on the part of bet 365 is therefore untrue.

The gambling company reacted to the newspaper’s accusations. How will Amaya and the other major operators react in the foreseeable future?

One Reply to “Grey Markets In Dismay! Who Is The Next Target?”