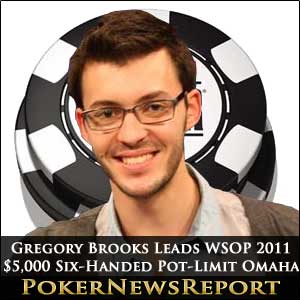 The second day kicked off with some exciting action as the remaining 105 players – from an original field of 507 – was cut down to just 15 after 10 levels of play to leave Brooks on 1,294,000 and followed by fellow American David Chiu in second place on 891,000.

Brooks was heavily involved in some massive hands last night – but none came bigger than when he eliminated Brooklyn’s Vanessa Selbst, the first day chip leader, in 18th.

Brooks took his time but re-raised to 203,000, only for Selbst to re-raise the pot and the former to call to put the 26-year-old all-in.

But everything changed come the turn as the 9c arrived to give Brooks a full house. The unfortunate Selbst looked shell-shocked as she realised her destiny – and a 7h on the river put her out for $23,519.

Chiu was also involved in an enormous pot with fellow Las Vegas pro Erick Lindgren that altered the tournament outcome. Under the gun, the 34-year-old Lindgren limped in, before Michael McDonald put in 36,000 to call. Chiu obliged and so did Lindgren.

The flop showed 2d-10s-Qs and Chiu put in a 100,000 bet. Lindgren contemplated the situation for a short time and then announced: “Raise the pot”.

California’s McDonald swiftly folded, before Chiu slid his stack into the middle to say: “Well, I know you have the straight flush outs, Erick, ’cause I have top set”.

The 3s arrived on the turn to give Lindgren a flush, although he had to hope that the board did not pair. Of course, the 10c arrived and four-time WSOP bracelet winner Chiu took down the pot to move above one million in chips, while a crippled Lindgren was out on the subsequent hand.

However, Chiu and Brooks are not the only stars left, with Jared Bleznick, Chris Moorman, Jason Mercier, Peter Jetten, McDonald and Dave ‘Devilfish’ Ulliott still in contention.

The last player to hit the rail last night was Tom ‘durrrr’ Dwan for $23,519 in 16th. It was an interesting day for the online poker specialist as he played just one hand in the $2,500 no-limit hold’em event before crashing out and also sits down in 144th after the opening day of the $10,000 H.O.R.S.E. Championship.

On the button, Florida’s Mercier made it 67,000 as the blinds then folded for Dwan to call. Dwan put his last 44,000 in before the flop arrived and Mercier called. The flop showed 4d-5d-Ac and, with Mercier holding Ad-As-4s-9d, Dwan was all but done.

Dwan was way behind Mercier’s trip aces with his 3s-7c-10s-10c and a turn of 8d meant the former was beaten and out, even before the Kh came on the river.