American Greg Ostrander has pocketed the second biggest prize so far of this summer’s World Series of Poker (WSOP) with victory at event #41 in Las Vegas. 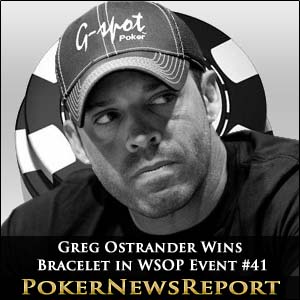 American Greg Ostrander has pocketed the second biggest prize so far of this summer’s World Series of Poker (WSOP) with victory at event #41 in Las Vegas.

Only two players returned for the unscheduled fourth day of the $3,000 buy-in No-Limit Hold’em tournament at the Rio All-Suite Hotel & Casino, but it was the New York State 40-year-old who emerged victorious – and $742,072 richer – after defeating Australian star Jackie Glazier to collect the 1,000th gold bracelet awarded at the series.

Even more impressive was Ostrander’s fightback from a 3 to 1 chip disadvantage – a deficit he wiped out quickly following some early double-ups against Melbourne’s Glazier.

Certainly, the overnight stop seemed to do former underwear model Ostrander a lot of good as the event turned out the way I wanted it to. But he was more than happy to admit what he needed was that break last night as claiming his first gold bracelet was looking unlikely at the end of Day 3.

However, while Ostrander also stressed that he is pretty good with a short stack, he did admit that he struggled when heads-up as Jackie was like two different players on Sunday – initially, when 10-handed, playing very tight, before switching gears to become more aggressive when play became three-handed.

He found this alteration very difficult to play against, mainly because he wasn’t ready – which made it tough for me to recover when losing a few big hands. But he added that he was prepared to switch gears if she did on Day 4, while confessing that he was delighted to get the right hands when I needed them for his momentous victory.

Ostrander extended his chip lead to almost four million after picking up on Glazier’s big bluff to hold 8.2 million to his opponent’s 4.3 million. Then, not long after, the tournament was over as Ostrander opened for 200,000 and big blind Glazier made the call to see a Q♣ 9♠ 6♠ flop.

Both checked for the 8♠ to arrive on the turn, with Glazier checking before Ostrander put in a bet of 450,000. Glazier called once more to see the dealer place the A♥ on the river, eliciting a check from Glazier. However, once Ostrander had bet one million, Glazier shoved all-in and was called.

Glazier showed 8♣ 6♦ for two pair, only for Ostrander to reveal 10♠ 7♦ for a straight to take down the pot and the tournament, leaving Glazier with $458,996 as runner-up.