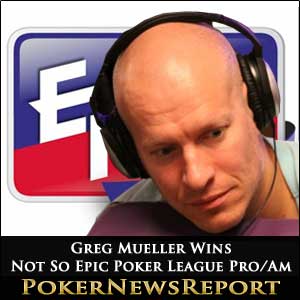 Greg Mueller – the ex-professional hockey player with the unfortunate online poker identity of “Full Blown Tilt”- has just won the second ever Epic Poker League (EPL) Pro/Am event against a final table that could have justifiably graced the forthcoming Main Event, but which was played like a play chip freeroll.

Leading from the Front

Playing for a Chip and a Chair

Twenty players made it through to the second day, each with the goal of finishing in the final nine and attaining one of the nine seats available for the EPL Main Event. There was no other prize money up for grabs as the tournament had been undersubscribed, however each of the nine qualifiers for the target tournament would also receive a sterling silver, limited edition “Commissioners Coin” – described as “coveted” by the EPL commissioner Annie Duke, and as a rather dull card marker by anybody else who has seen them.

Day 2 Begins Cautiously and Ends in a Farce

With blinds starting at 500/1,000, very few of the players were short stacked at the beginning of play. None of those that were could get the early double-up they needed and got out of the way quickly, leaving sixteen players to compete for five and a half hours to whittle the field down to the final nine – Jamie Kaplan being the unlucky bubble boy, having his Q♠ 2♦ turned over by Andreas Hoivold´s A♠ 3♥ on a 4♦ Q♣ A♣ flop. Once down to nine, the players continued just to determine a winner, but with three-way shoves going in with hands of no better than 10♠ 2♦, nobody was taking the game particularly seriously, and the final table was concluded within 45 minutes.

Despite increasing the range of satellites and bounty events to enable more recreational players to compete in the Pro/Am, only 97 players turned up for this second event – costing the EPL a $34,500 overlay in the value of the seats they were giving away for the Main Event. Possibly the novelty and glamour of the EPL as a whole has worn off following Chino Rheem´s victory in the inaugural event, but it is more likely that the start of the PokerStars WCOOP has had a major influence on the turn-out for this leg of the Epic Poker League.