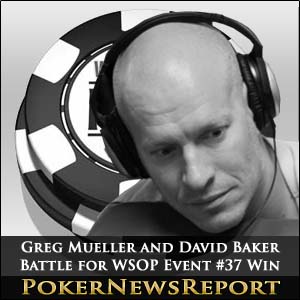 Greg ‘FBT’ Mueller and David ‘ODB’ Baker will have to return for a fourth day to decide a winner in event #37 at the World Series of Poker in Las Vegas.

The scheduled three days of the $2,500 buy-in Eight-Game Mix tournament at the Rio All-Suite Hotel & Casino will have to be extended as Canadian Muller and Connecticut’s Baker were halted just a short while ago by the hard-stop rule while battling it out in their heads-up clash.

The duo will return to the Amazon Room in the Rio later today to continue their clash during level 30 – with the blinds at 40,000/80,000. Just two hands of Stud remain at this level, but will two-time bracelet winner Mueller be able to make his chip advantage count when he starts off with 2.655 million to the 925,000 of Baker? Or will Baker make the breakthrough and capture his first WSOP title? All will be revealed later…

As it stands, New York State’s Kevin Calenzo was the final elimination of an exhausting Day 3, when he left in third place for $106,564 from the 27 survivors from Day 2 who still had hopes of claiming the $271,312 top prize.

Calenzo’s hopes ended over just a few hands, with Mueller doing the damage. During a round of Stud, Mueller brought in with the 3♥ before calling Calenzo’s completion. Calenzo then bet the turn and Mueller called, before both checked fifth street.