Following a 12-hour marathon session that began with the final three players, Greg Merson captured the gold bracelet in the 2012 WSOP Main Event. 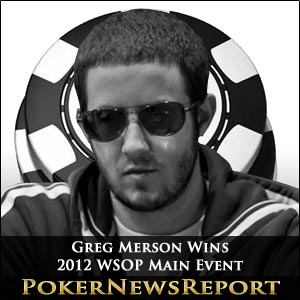 Following a 12-hour marathon session that began with the final three players, Greg Merson captured the gold bracelet in the 2012 WSOP Main Event.

The 24-year-old from Laurel, Maryland, bested a 6,598 player field in poker’s most prestigious tournament, collecting over $8.5 million in prize money. The victory concluded a tremendous 2012 WSOP for Merson, who cashed in three events prior to the Main Event, including the championship in a $10,000 buy-in, Six-handed No-Limit Hold’em tourney that netted $1,136,197.

Tuesday’s action that began with Greg Merson, Jesse Sylvia and Jake Balsiger went a grueling 10 hours before Balsiger’s Q-10 was beaten by Merson’s K-Q, sending the 21-year-old college student home with nearly $3.8 million. Many railbirds were commenting on how each of the trio were taking much too long to make a decision on each hand. The “tanking” once again brought up the discussion of the need for a poker shot clock in tournament play in order to speed things up and not induce boredom in spectators watching the action.

Following Balsiger’s exit, the heads-up match between Merson and Sylvia commenced with blind levels of 1 million/2 million and an ante of 300,000. Merson had almost a 3-2 lead in chips at 113,900,000 to Sylvia’s 84,300,000. Merson proceeded to play well and managed to steadily improve his chip lead. After a couple hours of heads-up action, the tournament’s final hand saw Merson shove his chips into the pot with K♦ 5♦ and Sylvia called with a stack of 35 big blinds holding Q♠ J♠. The board revealed 9♦ 6♣ 3♥ 6♠ 7♣, cementing Merson’s place in poker immortality. Sylvia, who led in chips when the tournament was paused in July, pocketed over $5.2 million as runner-up.

Commenting on his victory, Greg Merson said to WSOP officials,

I’ve played a lot of long cash games in my career, which helps you prepare for something like this, but this whole stage is something you can’t ever really prepare for. I couldn’t feel better for everyone who I’m sharing this victory with.

Merson had been an online pro prior to this summer, logging more than seven million poker hands throughout the years. He was mostly an obscure player during that stretch. But due to his success at this year’s WSOP, Merson will forever be a name well-known in the poker community. His victory also vaulted him into first place in the 2012 WSOP Player of the Year rankings, edging 13-time gold bracelet winner Phil Hellmuth for that title. Off the felt, Merson has also achieved success, conquering addictions to cocaine and heroin. The WSOP Main Event champ has been clean and sober for almost a year. Congratulations to Greg Merson and each of the Octo-Niners for an incredible final table.

The 2012 WSOP Main Event final results are as follows: