Three players remain among the “Octo-Nine” in the WSOP Main Event with Greg Merson holding the chip lead over Jesse Sylvia and Jake Balsiger. 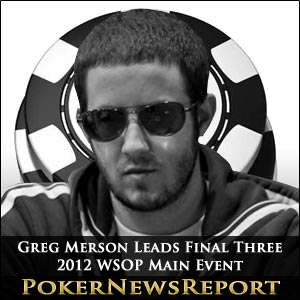 Three players remain among the “Octo-Nine” in the WSOP Main Event with Greg Merson holding the chip lead over Jesse Sylvia and Jake Balsiger.

The first elimination among the final tablists was Steven Gee less than two hours after action began. Gee made a move with pocket 8’s, but ran into the pocket ladies of Russell Thomas. If I knew he had pocket queens, I would have checked, Gee told ESPN following his elimination. Gee couldn’t add to the nearly $755,000 ninth place prize money that all the Octo-Niners received in July.

Robert Salaburu was the next to hit the rail when a queen on fifth street connected with Sylvia’s hand, giving him a higher pair. And moments later, Michael Esposito’s A-J lost to Merson’s big slick, sending him back home to Seaford, New York, with seventh place prize money of $1.2 million. Esposito may need his bounty for home repairs, as Hurricane Sandy is ravaging the east coast, including Seaford.

The final table’s only non-American, Andras Koroknai, went all-in with K-Q after six hours of action and was called by the A-K of Merson. Big slick held up again for Merson and gave him a commanding chip lead with 84 million after Koroknai’s ill-timed bluff. The Hungarian won $1.64 million for sixth place, slightly less than his largest career payday of $1.7 million for winning the 2010 World Poker Tour L.A. Poker Classic.

Merson had a good read on Koroknai’s playing style and mentioned to Sylvia during a break that he thought Koroknai would be knocked out on a bluff. When short-handed play starts, I think that’s my game because a lot of players either play too tight, or they over-adjust, Merson said.

Jeremy Ausmus grinded his way to fifth after starting the day with the least amount of chips at 9.8 million. The poker pro was eliminated when his open-ended straight draw failed to hit on the river, giving Sylvia the winning hand with a pair of 9’s. Ausmus pocketed $2,155,313, one of nine cashes in WSOP tournaments this year.

The day’s final elimination was Russell Thomas, who started the day in fourth place and finished there as well. His payday of $2.85 million allows the Aetna insurance actuary to say good-bye to his 9 to 5 gig and pursue his dream of playing poker for a living. Made my company a little mad because I quit my job in a newspaper article, and now I’m doing it in a press conference, Thomas said.

In July, 6,598 players ponied up the $10,000 buy-in for poker’s most heralded event and only three players remain. The winner will be crowned tomorrow at the Rio All-Suite Hotel and Casino in Las Vegas after roughly 80 hours of playing poker.

I can’t wait to get back up here and play, said Sylvia. We have a long battle tomorrow.