Ex-teacher Greg Hobson says poker has “been good to me” after pocketing $256,691 for winning the inaugural $1,500 Ante Only No-Limit Hold’em event in Las Vegas. 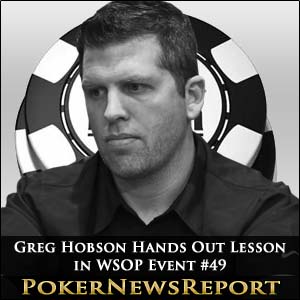 Ex-teacher Greg Hobson says poker has “been good to me” after pocketing $256,691 for winning the inaugural $1,500 Ante Only No-Limit Hold’em event in Las Vegas.

The Oregon pro, who captured the gold bracelet from event #49 at the World Series of Poker (WSOP) over the weekend after outlasting 938 other starters, has certainly seen his bank balance increase after finding it tough to get a job as a teacher.

The 33-year-old – who is probably better known by his online handle ‘DUCK_U’ – left his home state to relocate to Anchorage in Alaska with his wife and kids two years ago to move closer to his in-laws, but had already made the decision to become a full-time poker pro seven years earlier.

After unsuccessfully applying for several jobs in Oregon, Hobson “started substituting, started playing poker, then started doing better than I would if I was teaching”.

Once he realised poker would pay the bills back in 2003, the first-time WSOP winner “just went ahead” and played full-time and has been doing that ever since, adding that “it’s been good to me – I’ve been fortunate”.

But now, with this victory, Hobson has leapt up to $297,310 from his time at the series – and also ensured that his name will never be forgotten. Even now, though, the latest WSOP champion is still best known as an online pro, with his biggest cash arriving in May of 2010, when he picked up $473,550 for claiming fourth place at the PokerStars Spring Championship of Online Poker (SCOOP) $10,300 buy-in main event.

It will be interesting to see how he fares in live poker tournaments over the next few years. Is this just a flash in the pan? Or will Hobson display longevity to back up his obvious skills?

Either way, Hobson ultimately defeated Vegas-based Mike Sowers heads-up at the Rio All-Suite Hotel & Casino on Day 3 of event #49 after nine players returned to battle it out at the final table.

Hobson and Sowers began their heads-up clash pretty well even in chips, but the former quickly took charge by taking down two big pots. Sowers did mount a short-lived comeback, but eventually succumbed to Hobson.

The finalists had only been back from an hour-long dinner break for about 30 minutes when Sowers shoved all-in with A♣ 7♠ and was snap-called by Hobson, who showed 7♥ 7♦. The 9♠ K♥ 5♥ 9♦ 8♣ board was no good to Sowers, so ensuring that Hobson had finally made his mark on live tournament poker.