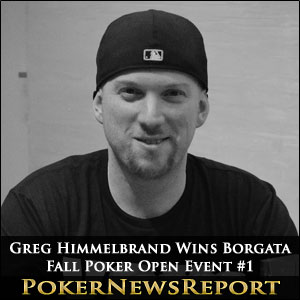 The Borgata Fall Poker Open made a welcome return last week, with fifteen “Main Events” scheduled among the forty-four poker tournaments that will take place over the next couple of weeks at the Atlantic City venue. As usual, Event #1 was one of the headline events (the other being the $2,500 buy-in Championship Event), and it attracted 2,899 entries over four starting flights, with the tournament scheduled to be concluded in one Day 2 on Friday.

However, such was the over-whelming number of players that wanted to take part in the tournament, the field of 586 players that returned to Day 2 only reached a final table at 5.00am the following morning, and the decision was made to bring back the players on Saturday afternoon to battle out the climax of the Borgata Poker Open Event #1.

Diaz Has Dream Start – Desmond Has A Nightmare

When the ten players took their seats for the climax of the Borgata Fall Poker Open Event #1, twenty-nine minutes remained in the level and, with blinds of 100K/200K (ante 30K), it was pretty obvious that Luis Diaz would be involved in the action from early on. Fortunately for him, he doubled up almost immediately with Queen-Five on a Queen high board, and his safety was assured for several more circuits of the button.

Unfortunately for Lorenzo Desmond, his luck turned in the other direction. After arriving late due to the previous night´s extended action, Desmond had lost more than a million chips in blinds he had not been there to play. On a rescue mission, he called Frank Nelson´s Ace-King shove with his own Ace-Queen and failed to improve, and – in the next hand – shoved his last 1.8 million chips into the middle with Ace-Jack. Nelson made the call with Ace-Queen and again the better Ace held up – Desmond bust from the tournament in tenth.

Chad Jackson was the next player to depart – shoving his A♦ 5♦ into Greg Himmelbrand´s A♠ Q♣ and busting out despite two diamonds appearing on the flop – and then it was Patrick Chan´s turn to get all-in with a suited Ace (A♦ 9♦), only to run into Luis Diaz´s pocket Kings. Soon after Greg Himmelbrand pulled off a massive double-up against George Alberto (Kings > Nines) and the “overnight” chip leader was bust from the tournament in seventh when he moved all-in on a Jack high flop with Jack-Ten, and was called – and out-kicked – by Simon Lam who was sitting on A♥ J♥.

A double-up by Brian Rosengarten against Frank Nelson did not prevent him from being the next player to leave the tournament and, as the blinds rose to 200K/400K with a 40K ante, he was first crippled by Ed Jacobs (Ace-King > Ace-Nine) and then lost the last of his chips against Luis Diaz Nine-Seven > Eight-Four, leaving the five remaining players closely grouped:

Thereafter, the players fell in the order that they lined up in when the game went five-handed – but unfortunately none of the hands were recorded. There is also some dispute over how much each player won – with the “official” payout tables reproduced below, but Greg Himmelbrand Tweeting that he won “166K and some change” after a final table deal that was also not reported.