For the first time in his professional poker career, former WSOP champ Greg Raymer is asking for financial backers. 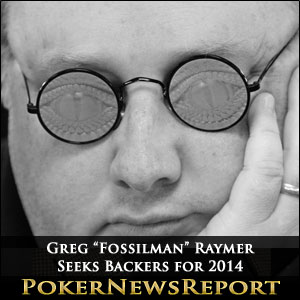 For the first time in his professional poker career, former WSOP champ Greg Raymer is asking for financial backers.

Has the 2004 WSOP Main Event champ and 2012 Heartland Poker Tour Player of the Year gone dead broke? Probably not, but at the urging of his wife Greg “Fossilman” Raymer will seek financial backers for his full 2014 poker tournament schedule.

In a recent post on the Two Plus Two forums, Raymer announced that he will be selling shares for all of my poker play in 2014. He goes onto state, Since I no longer receive a guaranteed source of income, my wife has become more and more nervous about me playing poker. The guaranteed source of income Raymer is referring to is his sponsorship deal with PokerStars, which ended abruptly in 2011.

The entirety of Raymer’s post can be found here.

The proposed deal is as follows: Raymer will sell shares of himself for $1,000 a piece, with hopes of raising at least $100,000. He would receive 40% of any profit above the $100k marker, and his investors would split the remaining 60% based on the amount of shares each one purchased, Raymer’s shares included. Of course the original $100k would be returned to shareholders.

If Raymer has a losing year, the investors would lose a percentage proportional to the number of shares purchased. For instance, if Raymer ends the year with $50k of the original $100k, each share would only be worth $500.

Fossilman didn’t exactly have a stellar 2013. Cashing in only six major tournaments and without a final table appearance to his credit, Raymer made a relatively paltry $30,000 and change playing live tournament poker. Contrast last year’s tepid performance to 2012, when he won an otherworldly four HPT titles outright, or to 2004, when he banked $5 million in a single tournament.

Compounding matters, last March Greg was arrested along with five other men in a Wake Forest prostitution sting. The charges against him were ultimately dropped after he completed 75 hours of community service at a local non-profit community center. He was also required to undergo a mental health assessment.

This isn’t the first time Raymer has sought investors. Between 2002 and 2004, he sold pieces of himself to a group of 18 investors, who each purchased 1-10 shares. Thanks to his 2004 Main Event win, the price of each share ballooned by approximately 6000%. Not a bad parlay.

But of course, Raymer would be hard pressed to repeat his 2004 performance. Poker has since become an extremely competitive game dominated by young pros. And despite his strong fundamentals and deep knowledge of the game, it may not be possible for the 49-year-old to ever enjoy the success he did a decade ago.