Barry Greenstein has made a link between the rights of gay couples to be married in the USA and the difficulties faced by online poker players in the States. 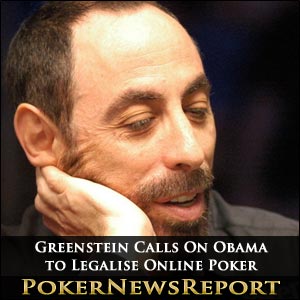 Respected poker pro Barry Greenstein has made a slightly tenuous link between the rights of gay couples to be married in the USA and the difficulties faced by internet poker players in the States.

US President Barack Obama stated on Wednesday that he backs same-sex marriage in his nation, ensuring that controversy erupted within the notoriously conservative country.

However, it is unlikely that Obama had any idea that Poker Hall of Famer Greenstein would weigh into the arguments by asserting on microblogging website Twitter that the president should consider the problems faced by poker players in the States in the same manner.

The 57-year-old Team PokerStars Pro believes that the USA’s leading politicians support the efforts made by many individuals and pressure groups to legalise internet poker but are unwilling to publicly reveal their backing following the events of Black Friday last year when the US Department of Justice (DoJ) shut down numerous online poker rooms – including Full Tilt Poker, PokerStars and Absolute Poker.

Certainly, these efforts to gain new legislation have so far failed to gain any great level of political support in Congress, although numerous states are individually considering intra-state laws after the DoJ adjusted their attitude towards internet poker last year.

However, while many will agree with Greenstein, Stuart Hoegner – a gaming solicitor and accountant – has questioned that position, mainly due to the fact those issues faced by disgruntled poker players cannot really be compared to the basic human rights of gay couples to be wed.

Hoegner said: “My problem is with the implication that the two rights are somehow equivalent. I support both rights, but they aren’t the same, nor are they equivalent. One is a fundamental issue of civil rights and human dignity.”

The lawyer continued by pointing out that, while American players’ freedoms to play online poker are important, as well as an economic right and a personal freedom, this issue cannot be accorded the same level of urgency as a state law discriminating on the basis of someone’s sexual orientation.

Hoegner – who also stated that enjoys playing online poker – added that he would never say that my right to attend an online cardroom is as imperative as someone’s right to state recognition of and respect for one of their closest and most intimate relationships, before emphasising that these rights are not worthy of the same deference and protection.

Additionally, Hoegner pointed out that, while Greenstein is “an exceedingly smart guy, an incredible poker player, and a passionate advocate for the game”, he is almost certain that the poker star’s “off-the-cuff” comments were probably made without really thinking through what he was writing on Twitter.

No matter, Greenstein should probably prepare himself for something of a backlash from many pressure groups within the USA.