American Grant Lang made a late and dramatic move to lead the way after Day 2 of the Doyle Brunson Five Diamond World Poker Classic in Las Vegas. 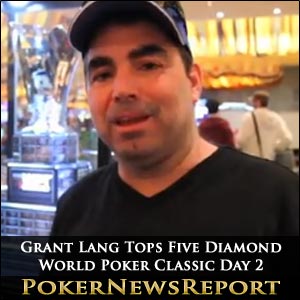 American Grant Lang made a late and dramatic move to lead the way after Day 2 of the Doyle Brunson Five Diamond World Poker Classic in Las Vegas.

Grant Lang bagged up with a chip stack of 382,000, which was particularly impressive as he spent much of the day at a table alongside the likes of Day 1 chip leader Vanessa Selbst, Tony Dunst and Allen Kessler – who was in 10th place after Day 1 – as well as Jared Bleznik, Lisa Hamilton and Annette Obrestad.

Americans also fill spots two and three, with Jeffrey Frerichs second on 342,900 and Scott Clements in third place with 330,100, while California-based Vietnamese star Soi Nguyen is fourth (329,800), yet another States pro in Jean Max Gaspard is fifth – dropping just two places – on 296,200, and Keith Ferrera in sixth on 295,800 to retain the spot he held after Day 1.

Just 149 players are still in contention for the top prize after Day 2 saw another 134 entries eliminated from a starting field of 365 in the $10,000 buy-in event at The Bellagio in Sin City that created a prize pool of more than $4 million.

Lang took over at the top of the chip leaderboard when winning the final hand of Day 2, taking nearly 50,000 chips from Selbst in the process to send her back down to 35th place on 148,000, which is almost 18,000 below the stack she started the second day with but a good distance above the average of 110,872.

Under the gun, Lang raised, Jared Bleznik called from middle position, as did big blind Selbst.

The flop showed K♥ 2♠ 2♦ and Selbst checked, only for Lang to bet 8,200. But Selbst and Bleznik called, ahead of the Ad turn.

Selbst checked once more and Lang bet 30,000 for Bleznik to fold, although he did allow Obrestad to take a peek at his hand before mucking.

Taking her time, Selbst eventually called, with a 5 on the river the seeing both players check again.

Lang revealed his pocket 2♥ 6♥ for three deuces, prompting Selbst to let out a perturbed sigh before letting Lang see a king.

However, both players see the funny side of the pot, with Selbst saying: “Missed 100,000 on the river,” in reference to Lang’s decision to check behind.

A smiling Lang replied: “It isn’t easy,” as he pulled in the pot that took him to the top of the chip count.