Day 1B of the UKIPT London Main Event saw 736 players join the action – bringing the total entry for the £770.00 buy-in tournament to more than a thousand. 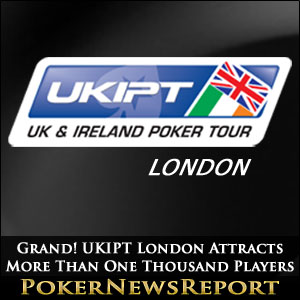 Day 1B of the UKIPT London Main Event saw 736 players join the action – bringing the total entry for the £770.00 buy-in tournament to more than a thousand.

The second opening flight of the UKIPT London Main Event was hectic in the extreme. 736 players who had qualified for the Main Event through an extensive satellite program on PokerStars – or who had bought in directly – travelled to the Grand Connaught Rooms to create a total entry for the tournament of 1,089 and a prize pool of £762,300.

At the close of ten 60-minute levels, UK poker player Eric Theissen bagged and tagged 293,200 chips to be the overall leader of the tournament when Day 2 gets underway later today. Theissen will have a lead of less than three big blinds over another of Day 1B´s top ranked players – Hamid Toghyan (279,000 chips), while Day 1A chip leader Garret Levrini sits in third place overall with 260,800 chips.

More Stars than in the Night Sky

As with Wednesday´s opening flight, Day 1B of the UKIPT London Main Event was graced with hundreds of well-know stars of the poker word. Team PokerStars Pro Bertrand “Elky” Grospelier, Eugene Katchalov and Mickey Petersen were joined at the tables by Team Online´s Vincente Delgado and Christian Favale; while Team PokerStars Sports Star Fatima Moreira de Melo added some glamour to the proceedings.

Further glamour was added by Sin Melin, who led the full complement of Full Tilt Poker´s UK Ambassadors to the tables. Unfortunately Melin and colleague Dernot Blain failed to make it through the day, although the Full Tilt flag will still be waved on Day 2 of the UKIPT London Main Event by UKIPT Series 5 victor Martins Adeniya (86,900 chips) and Ben Jenkins, who recovered from a shocking start to finish with 37,500 chips.

Other famous faces to make an appearance at the Grand Connaught Rooms included last year´s UKIPT Marbella winner Ludovic Geilich, Roberto Romanello and Shannon Shorr – who all survived the ten levels of action – but it was not such a successful outing to London for Chris Moorman, Sorel Mizzi, David Vamplew and Marvin Rettenmaier, who bust out before the end of the day along with last year´s UKIPT London Main Event champion Robbie Bull.

After late registration had closed, the prize money for the UKIPT London Main Event was announced. 159 players will share in the prize pool of £762,300, with £133,500 being allocated to the winner (subject to any final table deals). Those who make it through the bubble will be assured of a min-cash of £1,250, while players competing on Sunday´s eight-handed final table will have locked up £12,800.

With 323 players progressing into today´s Day 2 from the two opening flights, it is very likely that the bubble will burst sometime this evening. Those who have the misfortune to bust out before getting into the money will have the opportunity to satellite into the EPT London Main Event (which gets underway on Sunday) or compete in the UKIPT London Cup.

Indeed more than a dozen UKIPT side events are scheduled for this weekend at the Grand Connaught Rooms, including the High Rollers (£2,200 buy-in) which starts on Saturday, the Seniors Event and the Ladies Event (which both get underway on Sunday). It looks as though each of the next three days will also be hectic in the extreme at the UKIPT London.