GPI Wants To Take Poker To A Whole New Level 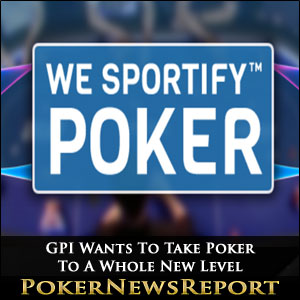 Five months after announcing the launch of a World Cup for the Sport of Poker, the GPI added a new piece to their grand puzzle and are set to create a professional league for the poker players.

Both sporting competitions will start next year. The Global Poker Masters will be the stage for some ‘international’ power plays with eight of the best countries in live poker tournament world competing against each other. Owner Alex Dreyfus explained on the GPI Corporate Blog:

We have clear precedents – Tennis has the Davis Cup, Football had the World Cup, and Poker has the GPM. On a personal level, I can’t wait to see what happens when ‘Team France’ runs into ‘Team USA.’

The other competition, the Global Poker League will be the game’s professional league compared by Dreyfus with Formula 1, UFC and NASCAR. Unlike with GPM, the new GPL will consist of six to eight different franchises (teams) with no nationality links whatsoever competing against one another throughout a season. The season will be three to four months long with events co-hosted by the big tours like EPT, LAPT, APPT and so on.

The professional franchises will have the unique opportunity to initially ‘draft’ their players from the GPI’s Rankings. Dreyfus said:

I’ve already presented this concept, and terms for participation, to a number of prospective future team owners. It’s been an extremely positive experience – reception has been warm across the board and we’ve already had a number of commitments from intrigued future ‘franchise’ owners. Commitments from leading figures from both in front and behind the felt are rolling in too.

GPI owner added that the media exposure of the teams and of the competitions can turn his big dream into reality.

What is Alex Dreyfus trying to do?

Since acquiring GPI, Dreyfus has had one goal in his mind: to help poker make the giant leap from just another gambling fun game to a sport in which skill prevails.

He sees this transformation as the final move for the game to go mainstream and to reach its true potential. He basically wants to eliminate the gambling aspect – no money and online grinding – which he thinks adds unnecessary distraction and hinders the game from becoming the next big think in the crowded sporting world.

With the creation of a professional league, poker could finally receive a much-needed cash infusion and media attention at a time when the online poker market is shrinking day by day and less and less players are willing to join the virtual felt. Turning the game into a sport could potentially relax the regulations and give the online world a breather. Not to mention it could change the way we think about the professionals from the boring grinders who prey on the weak to sporting figures who compete with the best of the best and win trophies and championships.

What do you think about GPI’s plan to ‘sportify’ poker? Can it revitalize the market? Be sure to write your opinion about the matter in the comments section below.