On Friday the Global Poker Index took advantage of the growing World Cup 2014 fever to announce its Global Poker Masters – a World Cup for the Sport of Poker. 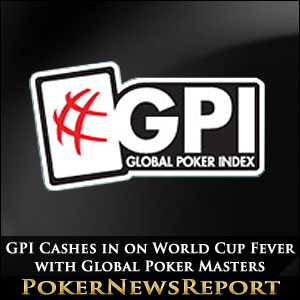 On Friday the Global Poker Index took advantage of the growing World Cup 2014 fever to announce its Global Poker Masters – a World Cup for the Sport of Poker.

The Global Poker Index never misses an opportunity to grab some marketing limelight, and on Friday the system for ranking the world´s best poker players announced it was going to invite the top four players in the index´s nine highest rated countries to compete in the Global Poker Masters – a World Cup for the Sport of Poker.

The proposed Global Poker Masters is going to be a $10,000 buy-in series of sixteen Sit n Go games, with one representative from each of the nine countries seated at each table. Points will be added to each country´s score according to the finishing position of that country´s representative, and each player will compete in four different Sit n Go games (much like Party Poker´s Premier League).

The team with the highest score after the sixteen Sit n Go games have been played will be declared the winners, with the teams who finish second and third also cashing in the event. The Global Poker Index is adding $100,000 to the prize pool, which will be distributed among the players from the winning countries.

Who is Going to be There?

The Global Poker Index was criticised earlier this year by Party Poker´s Mike Sexton as bogus for only counting a player´s gross winnings irrespective of how many times he or she enters an event; and the current GPI index is dominated by players who can afford multiple buy-ins to the world´s most expensive events (strangely with the exception of Team GB).

Assuming that the Global Poker Masters is scheduled not to clash with any of the world´s leading poker tours it is meant to compliment, and the top four players in the index´s nine highest rated countries turn up, the line-up for the inaugural Global Poker Masters would currently look something like this:

So, one thing that the Global Poker Masters will have in common with the FIFA 2014 World Cup is that many of the world´s top players will not be taking part. For example, the English football team head to Rio without John Terry and Ashley Cole – the English poker team will travel to an as yet unannounced location without Sam Trickett and Chris Moorman, Jake Cody or Vicky Coren (with apologies to the Scottish and Irish poker players who do qualify to play for Team GB).

The Russians will be missing Igor Kurganov, the Dutch Pieter De Korver, the French Ludovic Lacay and the Australians Aaron Lim. There is no place for the WSOP´s greatest player ever Phil Hellmuth, the WPT Player of the Year Mukul Pahuja or the three all-time top US money earners – Antonio Esfandiari, Phil Ivey and Erik Seidel. Finally, Canada did not actually qualify for the FIFA 2014 World Cup, so why have they been allowed to enter this one at the expense of Brazil?

How Can the GPI Succeed Where Others have Failed?

Inasmuch as Dreyfus´ goals are commendable, nobody has yet explained the connection between the proposed private members-only Sit n Go and the re-emergence on online poker in the US. It might have escaped Dreyfus´ attention, but the regulation of online poker in the States to date has hardly been a runaway success (there were more players on the unregulated Bovada Poker last night than playing on all the US regulated poker sites combined).

Furthermore, World Cup´s of Poker have been tried before, and none of them are still around today – PokerStars´ WCOP ran for eight years until being abandoned through lack of support, whereas the annual IFP Duplicate Poker Nations Cup ran for just one year before having the plug pulled on it. The attraction of having players compete to be the best of the best failed to work for the Epic Poker League, and the broadcasting of the event is unlikely to attract many new viewers – consequently failing to communicate the intended Poker is a Sport message to anybody outside of the sport.

Add a couple of marketing fails (the event is not going to be played until 2015, yet all the marketing is branded GPM 2014), and the fact that the dates and venue for the first Global Poker Masters will be announced some weeks after the FIFA World Cup 2014 has finished, and this proposed World Cup for the Sport of Poker looks like being just another marketing gimmick for the Global Poker Index.