Last weekend´s inaugural GPI American Poker Awards have universally been given the thumbs up by everybody who attended the conference and ceremony event. 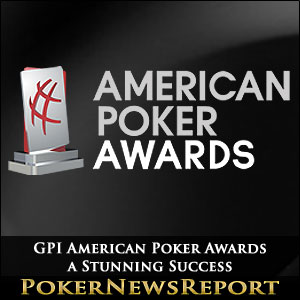 Last weekend´s inaugural GPI American Poker Awards have universally been given the thumbs up by everybody who attended the conference and ceremony event.

Last Friday saw the first ever GPI American Poker Awards hosted at the SLS Hotel in Beverley Hills, California. More than just a celebration of the best of poker in the United States, the Awards followed a summit focusing on the current state of poker (both live and online) and where it was headed in the future.

Speakers at the summit included many influential players in the poker industry and representatives not only from organizations that already have a major presence in the US, but from those who aim to enter the market in the near future. The summit also included a discussion featuring some of the top players in the game, who voiced their opinions about where they would like to see poker heading in the US.

Key Takeaways from the Poker Summit

The key takeaway for anybody looking in from outside was that many of the representatives seem to have forgotten the relationship between live poker and online poker prior to Black Friday. Many of the comments related to how live and online poker are not living in harmony at the moment (where online poker is regulated we assume) and should work together for “mutual benefit” – PokerStars national tours and EPT/APPT events being given as an example.

Several speakers suggested that lower buy-in events would attract more players to the live game as well as flatter payout structures so that players who cashed (or who were close to cashing) were encouraged to try again. In this respect the WSOP representatives got a lot of praise for the changes they have made to this year´s tournament schedule.

The player´s discussion was particularly interesting for the comments made about how online poker sites were pandering to the regs (particularly on the 2+2 forums) and that the TV broadcasts of poker games “alienated” potential new players by over-complicating what was going on. “Always cater to the people at the bottom” said Daniel Negreanu, who was supported by PokerStars´ latest sponsored pro – Jason Somerville – who said it was important for poker sites to realize that the backbone of the industry is the recreational player.

Then It´s Time to Party!

Once the conference had drawn to a close, it was time for the delegates to change into their glad rags and get together for the awards ceremony hosted by Kara Scott. The awards for the male (Dan Colman) and the female (Vanessa Selbst) players of the year had already been determined by their respective performances in the Global Poker Index. The remaining awards were as follow:

Industry Person of the Year – Adam Pliska, President of the WPT

Poker´s Best Ambassador (voted for by the public) – Daniel Negreanu

The speeches from the winners (and those who represented them) contained a mixture of humor and respect. Ty Stewart (on behalf of Dan Colman and WSOP) was in good form, as was Brandon Shack-Harris – thanking Dan Colman for his leftovers. Vanessa Selbst momentarily had the attendees petrified at the prospect that the leading female player was about to launch into a public debate on lady´s poker tournaments, and Mark Newhouse said that he was amazed to win an award for the tournament performance of the year after seeing that the list of nominees read “winner, winner, winner, ninth”.

Chris Grove acknowledged the contribution that the sadly-departed Diamond Flush had made to poker media, Ty Stewart (who lost a lot of weight running back and forth to the stage) said that everybody behind the scenes at the WSOP deserved respect for maintaining the profile of the Main Event despite the lack of online poker in the US, and Daniel Negreanu opened his acceptance speech by thanking Alex Dreyfus for organizing the day´s proceedings – referring to Alex Dreyfus as a “visionary”.

Many of the industry stars who were in attendance at the American Poker Awards had sparkling comments to make about the event and Alex Dreyfus in particular.

Congrat’s to all winners (& losers) at #AmericanPokerAwards & thx to @alex_dreyfus for making it happen. It was a great evening. #vision

One of the most exciting nights in poker history due to @alex_dreyfus and GPI staff Thanks for elevating the game. #AmericanPokerAwards

Congrats to all the winners at the American Poker Awards. Well deserved. Well done @GlobalPokerIndx and @alex_dreyfus and his team.