Gov. Christie Calls for Summit on Future of Atlantic City

With three casinos set to close by mid-September, Gov. Chris Christie has asked a number of state officials to participate in a summit next month. 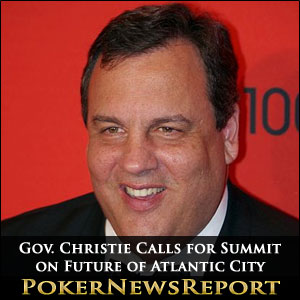 With three casinos set to close by mid-September, Gov. Chris Christie has asked a number of state officials to participate in a summit next month.

Scheduled for Sept. 8, summit attendees are expected to discuss the current problems facing Atlantic City. The closings within the next five weeks or so of Trump Plaza, Revel and the Showboat casinos are at the forefront of those problems.

Also likely on the summit agenda are the disappointing revenue numbers reported at Atlantic City casinos in July. Revenue was down 6.6% from the same month last year, the Division of Gaming Enforcement said.

Officials representing state, local and county government offices will be part of the roundtable, as will players in the casino industry. With some 6,000 casino employees set to be out of work due to the casino shutdowns, labor representatives will also be present.

Christie released a statement yesterday regarding the summit, explaining that Atlantic City faces real challenges as the city undergoes revitalization. A five-year plan to revitalize the industry was implemented three years ago, but that plan must take on a new direction considering that come September, 1/3 of Atlantic City casinos will have closed in a span of nine months when January’s shutdown of the Atlantic Club is included.

State Sen. Jim Whelan, who championed the state’s online gambling legislation, will be part of the summit. Whelan told the Press of Atlantic City that the main reason why New Jersey casinos have struggled is the proliferation of the casinos up and down the East Coast.

Neighboring states such as Maryland and Pennsylvania have opened new casinos in recent years, siphoning a good chunk of casino traffic from Atlantic City. The situation does not look promising for the future, as New York has plans in the works to construct new casinos as well.

There are indications that the powers that be in Atlantic City intend to market the virtues of the seaside resorts to the non-gaming crowd. There are any number of attractions on the boardwalk that are not limited to casino action.

Following the scheduled summit, the New Jersey Gaming, Sports and Entertainment Advisory Commission will likely make recommendations regarding ideas or reforms borne from the meeting of minds of state and local officials. Whatever those suggestions may be, it’s obvious that something needs to be done to bolster the struggling industry.

State gaming regulators reported that July revenue at Showboat, Revel, and Trump Plaza, the three casinos that will soon be locking their doors, was down 19%, 36% and 34%, respectively. On the bright side, Tropicana and Golden Nugget revenue for July increased 34% and 40% when compared to the same month last year.

Online gambling showed positive gains for July. Revenue was over $10 million, up from the $9.5 million in June. Internet gambling operations have been in place less than one year and are still experiencing growing pains, so any month-over-month increases are encouraging.