Yesterday´s mid-term elections saw the Republican´s take a majority in both houses, but this does not signal the end for online poker in the United States. 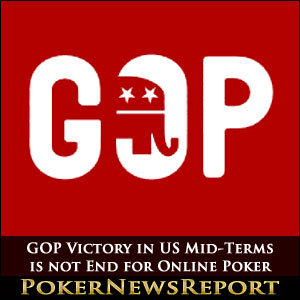 Yesterday´s mid-term elections saw the Republican´s take a majority in both houses, but this does not signal the end for online poker in the United States.

For supporters of online poker in the United States, the news that the Republican Party had swept into a majority in the Senate and increased their power in the House of Representatives will be seen as a major blow.

Many Republicans are perceived to be against online gambling – mostly due to the financial support provided by anti-online gambling billionaire Sheldon Adelson – and it was Republican support for UIEGA that allowed the passage of the Bill in 2006.

However, Republican control of the Senate does not make Adelson´s proposed online gambling ban a foregone conclusion – indeed, there are many positives that can be taken out of last night´s results for the future of online poker in the United States.

Divisions within the Republican Party

Not every Republican candidate benefits from Sheldon´s billions and some have strong reasons for fighting against an online gambling ban – for example new Senate majority leader Mitch McConnell, whose home state of Kentucky would suffer a significant decrease in revenues if online betting on horse racing was outlawed.

Nevada´s Dean Heller would obviously be against an online gambling proposition, as would Saxby Chambliss and Johnny Isakson from Georgia – one of the first states to establish an online lottery in 2012, which last year generated $927.5 million towards two state education initiatives. The same would apply to Mark Kirk from Illinois, where a thriving online lottery also exists.

Some Republicans insist that Sheldon Adelson´s purchasing of anti-gambling legislation amounts to corruption (as Adelson´s brick and mortar casinos would benefit as a result), while others insist that a federal ban on online gaming would erode the rights granted to individual states under the Tenth Amendment to the US Constitution.

One of the highlights of last night´s mid-term results was the victory of Republican Charlie Baker over Democrat Martha Croakley in the race to be the new Governor of Massachusetts. Massachusetts was identified in a recent Morgan Stanley report to be one of the top twenty states likely to regulated online poker in the next few years, and Baker´s victory makes this scenario more likely.

Martha Croakley – who was at one point way ahead of Baker in the polls – has made multiple statements against online poker and gambling in general, and was identified by the Poker Players Association as one of the “Jokers in the Pack” who were more likely to prohibit online poker than support it. Had Croakley been elected as Governor, there is little doubt that she would have vetoed a bill regulating online poker in Massachusetts.

By comparison, Charlie Baker is considered to be a social liberal with positive views towards abortion rights and gay marriage. Earlier this year he publicly supported the proposed MGM Casino Resort in Springfield and strongly opposed Question 3 on yesterday´s ballot, which would have repealed a 2012 law to allow three casinos and a slots parlor in the state.

Biggest Threat May Still be RAWA

The biggest threat to online poker in the United States may still be the “Restoration of America´s Wire Act” (RAWA) – a federal bill that was introduced into the House of Representatives by Jason Chaffetz (R-Utah) and the Senate by Sen. Lindsey Graham (R-SC) in March. The Bill aims to restore the original interpretation of the 1961 Wire Act which would prohibit many forms of Internet gambling.

To date the bill has been read twice in the Senate and passed to the Committee on the Judiciary. There is the possibility that it could be presented for a vote during the forthcoming “lame duck” legislative session between November 9th and the congressional beak for Thanksgiving on November 27; and, although the Democrats still hold a majority in the Senate until the beginning of 2015, the Bill could still be sneaked through in much the same way as UIEGA was.

The consequences of RAWA being passed into law would be devastating for online gambling in the United States. It would put an end to regulated online poker in New Jersey, Delaware and Nevada, stop all online casinos and online lotteries from operating and make a huge financial hole in the budgets of states that allow gambling on the Internet in one form or another.

The passage of RAWA would also set a significant precedent for Internet activity being controlled by the Senate – now a Republican-controlled Senate!