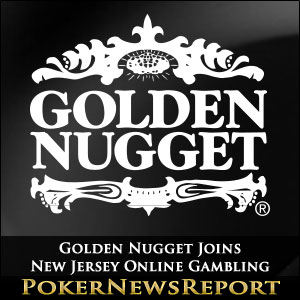 The stamp of approval from the Division of Gaming Enforcement (DGE) was effective at 12:01 a.m. on Saturday, December 14, allowing the Golden Nugget to join six other Atlantic City casinos in the state’s online gambling regime. The casino was part of the initial soft launch on November 26, but needed a bit more time to work out some glitches and refine their product.

The Golden Nugget was intent on giving players within New Jersey a first-class online gaming experience and are now very satisfied with their offerings, said casino general manager Tom Pohlman. Those offerings include more video poker, slots and table games than the in-state competition, as well as relative ease in funding accounts and playing.

A total of 77 game titles are available at GoldenNuggetCasino.com, some of which have not yet been introduced in the casino itself, AP reported. The methods of deposit for online accounts include MasterCard, Visa, personal checks, bank transfers, cash while visiting the Golden Nugget cashier cage, and a prepaid cash Discover card.

Golden Nugget becomes the seventh Atlantic City casino to enter the realm of real-money online gaming, following the lead of Bally’s, Caesars, Trump Plaza, Trump Taj Mahal, Tropicana and Borgata. Five of the state’s dozen casinos are not offering Internet wagering at this time, with Showboat, Harrah’s, Resorts, Revel and the Atlantic Club rounding out that list.

The Resorts Casino Hotel may be looking for a new online gambling partner after PokerStars’ application for a license was suspended for two years by DGE officials last week. Harrah’s and Showboat are Caesars-owned properties and that conglomerate is utilizing its license availability through two of its other casinos, Bally’s and Caesars Atlantic City.

The Revel and Atlantic Club were both mired in bankruptcy proceedings this year, leaving the possibility of entering the online gambling space to a possible future date. The Atlantic Club listed its assets and liabilities last week and may soon find new ownership via public auction.

New Jersey’s Internet gambling scheme is being watched closely throughout the world. While the battle for market share is often analyzed, perhaps a more telling statistic will be whether or not attendance at brick and mortar casinos declines as a result of online gaming availability. The DGE will begin publishing revenue totals in mid-January.