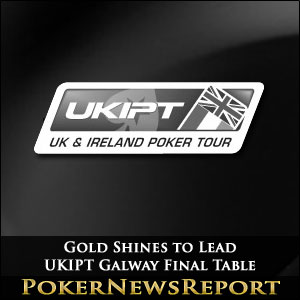 The fifty-one hopefuls who returned to the Full Tilt Poker Village yesterday were all assured of cashing in the feature event of the Galway Poker Festival but, for many, dreams of a final table appearance and the chance of winning the €205,600 first prize were dashed within the first couple of hours of the cards being in the air.

Among the early casualties were Padraig Parkinson, Dale Philip and up-and-coming Irish star Alexander Tikhoniouk, as the field was reduced to twenty-seven within two levels of play. Overnight chip leader – Tim Michels – was still at the top of the leaderboard, but his lead was being narrowed by Alan Gold and Dara Davey – with all three seated at the same table.

No Silver on Final Table

Max Silver – who finished sixth in last week´s Irish Poker Championship – was also making a charge up the leaderboard after busting out Yuriy Nesterenko (J-9 > A-6) , hitting a set of Aces over Tim Michels set of Kings and winning an A♥ 5♥ > A♠ Q♥ flip against Jonathan Slater.

Silver completed Michels´ demise when busting him out in twelfth place (7♣ 3♣ > A♥ 8♠) however, he was denied a second final table appearance at the Irish Poker Festival when his A♣ 6♦ failed to improve past Jonathan Slater´s 10♥ 10♠ and was bust in ninth place when his own pocket Tens ran into the pocket Kings of Dara Davey.

Dara Davey is one of three players still in with a chance of winning the Full Tilt Poker UKIPT sponsorship package for the last FTP qualifier standing in the UKIPT Galway Main Event. Davey, Gold or Damian Porebski could snap up an entry plus their expenses for the remaining UKIPT Main Events in Season 4 – London, Isle of Man and Nottingham.

Of the other five players at the final table, local player Christy Morkan qualified through a freeroll at his local Ceasers Casino, Jonathan Slater is a regular UKIPT competitor who chopped a side event in Galway last year, Dimitri Pembroke is a self-proclaimed “amateur” with an impressive résumé in Irish live poker events, Benjamin Spragg is a full-time player on PokerStars and Paul Febers, who has enjoyed online success in a miniFTOPS event this year, but who qualified for the UKIPT Galway Main Event on PokerStars.

Looking ahead to the Final Table

When play resumes at the Full Tilt Poker Village this afternoon, players will be mid-way through Level 24 (blinds 20,000/40,000 – ante 5,000) with the next player out due to collect just €16,800 for their efforts. Thereafter the jumps between places increase dramatically, with the winner taking home €205,600.

On the evidence of the last four days, there will be plenty of action from the 12.00 noon start and it is significant that Dara Davey is seated to the right of Alan Gold and will have position on him throughout the climax of the event.

You can find out who wins the UKIPT Galway Main Event by following PokerNewsReport on Twitter.