Argentinean poker player Nicolas Godoy heads the PCA Main Event after a Day 2 which had to be cut short because the tournament was running out of players! 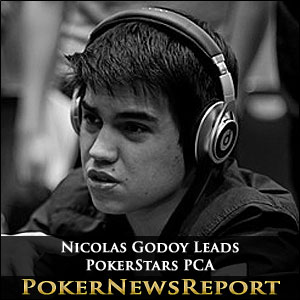 Argentinean poker player Nicolas Godoy heads the PCA Main Event after a Day 2 which had to be cut short because the tournament was running out of players!

Godoy – who won his PCA Main Event package in a $10.00 qualifier – finished the day with a substantial lead over Darren Elias and Michael Mizrachi, as the 501 players who returned for Day 2 were whittled down to just 166 within five levels of play.

While famous names such as Ivey, Helmuth and Negreanu were hitting the rail, the 19-year-old student from Corrientes racked up an impressive 724,200 chips and was responsible for much of the carnage which saw the tournament organisers stop the day´s proceedings a level early.

Nicolas Godoy was involved in action early – crushing Day 1A chip leader Maxim Lobzhanidze (A♦ 10♦ > J♥ J♠) when rivering a Broadway Straight to best Lobzhanidze´s turned set of Jacks. Lobzhanidze recovered to finish the day on 121,300 chips, but other players were not so fortunate.

Alexander Scherdin was busted out of the tournament by Godoy (Q♥ Q♠) when his A♦ K♥ could not connect with any of the community cards, and Josh Prager also selected the wrong moment to shove the last of his chips with A♣ 4♠ – missing everything on the board and finding Godoy on the button with pocket Deuces.

Just 22 Places from the Bubble

Players who make it through the bubble today are assured of a minimum payday of $15,000. Those with their sights on the first prize of $1,859,000 include:-