Global Poker Index Player of the Year Award Up and Running

Federated Sports + Gaming (FS+G) have launched the Global Poker Index (GPI) Player of the Year Award, which will be given every 12 months to the poker pro with the best live tournament performances over a calendar year. 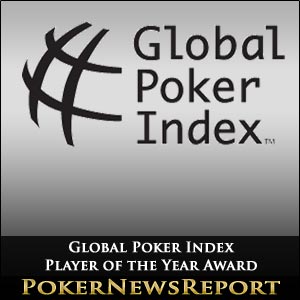 Federated Sports + Gaming (FS+G) have launched the Global Poker Index (GPI) Player of the Year Award, which will be given every 12 months to the poker pro with the best live tournament performances over a calendar year.

Of course, the GPI award is one among many, but the system employed really does provide a relevant and fair-handed approach to deciding which player is deserving of such an accolade.

Right now, as the scoring has already started for this year’s PoY award, French-Canadian Team PokerStars Pro Jonathan Duhamel is – you won’t be at all surprised to read – the current leader in the race to the crown.

The GPI 300 records the results of players during a three-year rolling window that provides more weight to recent results over six half-year periods, so ensuring that the pros displaying the greatest consistency will rise to the top.

However, the formula employed to reach a PoY winner is not quite the same as the GPI 300 as the calculation only takes into account cashes from tournaments with $1,500-plus buy-ins.

Moreover, the PoY method limits the eligible number of scores at six for the months between January 1 and June 30, while the latter half of the year only allows for a player’s top five results to be used.

Annie Duke, the FS+G executive vice-president and Epic Poker League (EPL) commissioner, is certainly very excited by the introduction of such a prize, saying she is “thrilled to be able to apply the precision and quality of the GPI formula to a Player of the Year race”.

The one-time World Series of Poker (WSOP) bracelet winner from California also stressed that the player of year award “will showcase the single player at the apex of the game”.

This year’s player of the year award will be given to the pro showing up best between January 1 and December 31, while the top 1,000 on the list for every week will appear each Wednesday at GlobalPokerIndex.com.

Additionally, a monthly review of the PoY race will appear on both websites on the first Wednesday every month as the race to glory heats up.

The eventual winner will pick up an 18 karat gold player of the year ring, which has been designed by famed American jeweller Josh Warner – the man who created the EPL Champion and Lifetime Member rings.

The 27-year-old Yale University graduate – who picked up $227,965 for winning event #19, a $1,500 buy-in Pot-Limit Omaha tournament, at the 2008 WSOP in Las Vegas – stressed that, by employing “rigorous and objective analysis” of the GPI to an award such as this, FS+G have heralded a noteworthy “move forward for the poker community”.

So, the current PoY leader is one-time WSOP bracelet winner Duhamel after the 24-year-old kicked off 2012 in storming fashion.

Sitting at 82nd place on January 1 in the GPI 300, the Quebec pro had climbed to a high of 10 by January 23 – although he has now dropped back down to 16 – because of his wonderful PokerStars Caribbean Adventure (PCA) last month.

Incredibly, Duhamel has already managed to record five ranking scores towards his PoY points – with every one a final-table cash.

What is even more amazing – and why Duhamel sits atop the PoY chase – is that the Canadian notched four of those cashes inside seven days!

Not long after the PCA finished, Duhamel ventured into Europe to finish eighth – from yet another final table appearance – in the €2,000 buy-in No-Limit Hold’em event at the European Poker Tour (EPT) Deauville in France for $18,281 on February 3.

That’s more than $1.2 million earned from just five events, so resulting in Duhamel topping the PoY table on 465.56 points – way ahead of second-placed American Jason Koon, who sits on 284.24.

Koon also closed out January with 27th in the Aussie Millions AUD$10,000 buy-in No-Limit Hold’em main event in Melbourne for $36,032 to stay ahead of a chasing pack that is covered by just over 42 points down to fifth place on the PoY.

Meanwhile, San Jose’s Jaka recorded top three finishes in Melbourne and the Caribbean, but still fell two spots after the striking performances of Visser – who leapt 26 places – and Chartier.

Renowned Pros Closing in on Top 10

Incidentally, Russian Leonid Bilokur – the PCA High Roller champion for $1,134,930 – holds the 16th spot, but has dropped down five places on 188.72 points, while his high of sixth place is out of sight for now as he had not recorded any scores since that success on January 12.

There should be lots of movement over the next few weeks, as well, with 10 tournaments qualifying for PoY points during this month.

Certainly, players can expect to zoom up the charts – or be overtaken as points won cannot be reduced over time – with events such as the LA Poker Classic, which runs from the 18th to the 29th, and the WPT Venice Grand Prix $10,000 No-Limit Hold’em main event, which ended on the 10th, taking place this month.

Additionally, the WPT arrived in Hollywood last friday for the Seminole Hard Rock Lucky Hearts Poker Open, which includes a $3,500 buy-in main event, while the EPT next takes in Copenhagen for the February 20 to 25 stop that includes a DKK37,250 main tournament.

Top 10 on the GPI Player of the Year list