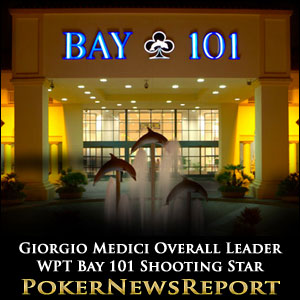 The WPT Bay 101 Shooting Star is one of the most popular stops on the World Poker Tour – for players and fans alike. The format of the $7,500 buy-in tournament allows for a single re-entry, and between 25 and 30 players each day are nominated as bounties – with the player knocking them out receiving a $2,500 bonus and an autographed t-shirt from their victim.

With late registration and re-entry still open until the start of Day 2, there have been 713 entries into the WPT Bay 101 Shooting Star to date over the two Day 1s; with the event attracting support from players such as WSOP Main Event Champion Ryan Riess, Daniel Negreanu, Jason Mercier and last week´s WPT LA Poker Classic winner Chris Moorman.

The overall chip leader going into Day 2 is Las Vegas based Italian poker player Giorgio Medici. Medici finished Day 1A with 254,600 chips – just edging Hai Tran (253,500 chips) out of the $10,000 bonus for being the chip leader at the end of the day. Medici´s stack was also good enough to retain the overall lead in the event when Lucas Ke completed Day 1B as chip leader with 252,000 chips.

Some of the Stars that Got Shot

Among the thirty-four bounties which fell during the opening flights of the WPT Bay 101 Shooting Star, none was more unfortunate than the popular Will Failla. Failla had got his stack in with A♥ A♣ against Bryce Yockey´s A♦ 5♣ and was looking good to double up when the A♠ appeared in the window. Unfortunately for Failla, the board completed A♠ 4♣ 3♠ / 8♣ / 2♠ to give Yockey a wheel straight and a $2,500 bonus for knocking him out.

Phil Hellmuth made his traditional late entrance, but also an early exit, when his 5♥ 5♣ was unable to improve past his opponent´s K♦ K♠, and Vanessa Selbst fired two bullets on Day 1B after having her bounty taken by Christian Harder 4♠ 4♣ > A♣ 6♠. Ryan Riess was busted J♦ J♣ > 10♠ 10♦ by Grant Hillman, and Daniel Negreanu was torn between playing in the event or watching the Sharks/Leafs game until this happened:

With late entries and late re-entries today, more than 300 players will take their seats at the Bay 101 Casino in San Jose later today for Day 2 of the Shooting Stars event. The tournament will recommence in Level 11 with blinds of 600/1,200 (ante 200) and is scheduled to continue until just eighteen players remain – with the game going six-handed when just 36 players are left.

That schedule is likely to be a tough ask with more than 300 players still involved and blinds increasing in length to 90 minutes – especially as the bubble is likely to burst later today, and the hand-for-hand play immediately before that happening is notoriously slow. Those who we expect to find still in contention when the WPT Bay 101 Shooting Star hits the money include: