A legal challenge to the UK Gambling Act by the Gibraltar Betting and Gaming Association (GBGA) has been rejected by the Royal Courts of Justice in London. 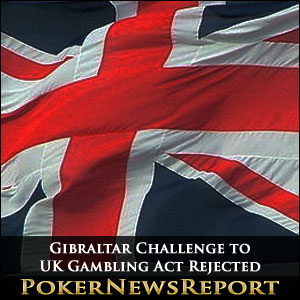 A legal challenge to the UK Gambling Act by the Gibraltar Betting and Gaming Association (GBGA) has been rejected by the Royal Courts of Justice in London.

The UK Gambling (Advertising and Licensing) Act is an Act of Parliament which requires remote gambling operators (those not physically located in the UK) to obtain licences to provide an online gambling service to UK gamblers and to pay a point of consumption tax of 15% on the profits made from their UK operations.

The Act was due to take effect on 1st October but, after a last-minute legal challenge to the Act by the Gibraltar Betting and Gaming Association (GBGA), a hearing took place at the Royal Courts of Justice in London and implementation of the legislation was delayed until 1st November.

The GBGA represents a vast number of remote operators who are household names in the UK. The online activities of 888, William Hill, Bet365, Ladbrokes, Bwin.Party, Betfair and Victor Chandler are all based in Gibraltar because of the tax advantages offered by the Crown State Territory.

On behalf of these companies the GBGA took legal action on the grounds that the implementation of a 15% tax would create an unfair advantage to UK-based operators and that the UK Gambling Act was illegitimate, disproportionate and discriminatory interference with the right to free movement of services guaranteed by Article 56 [of the] Treaty of the Functioning of the European Union.

The GBGA suggested an alternative “passport solution” for regulating online gambling in the UK that would create a consistency of regulation between what was already in place in Gibraltar and what was being proposed in the new Act. The GBGA also claimed that this solution would impose a more proportionate burden on its members.

After the two-day hearing at the end of September, Mr Justice Nicholas Green announced that he would not be able to make a decision on the case until after the 1st October – the date on which the UK Gambling Act was due to take effect. The Act was delayed by one month pending his verdict, and yesterday Justice Green released a 96-page decision rejecting the GBGA arguments.

In the paper, Justice Green found that the GBGA had failed to show that the new legislation was unlawful under UK or EU law – pointing out that Gibraltar was not a full member of the EU anyway. The judge wrote that the UK Gambling Act served a series of legitimate objectives and was neither disproportionate nor discriminatory.

In respect of the GBGA´s proposed passport solution, the judge wrote that it would fail to meet the objectives of the Act or prove effective or achievable without significant bureaucracy or extra cost. The judge concluded by dismissing the GBGA´s concerns that the UK regulator will find it difficult to hold companies to account in jurisdictions outside the EU.

Reaction to the Verdict

After the verdict was announced, a spokesperson for the GBGA said that they were disappointed with Justice Green´s ruling. He said that the UK had an opportunity to introduce a cross-border regulatory regime which would benefit consumers and the industry alike. The GBGA maintains that the new legislation is not in the best interests of UK gamblers, but it will not appeal the verdict.

A statement released by the Department for Culture, Media and Sports – the Government department responsible for introducing the UK Gambling Act – welcomed the verdict. It said that the implementation of the Gambling (Licensing and Advertising) Act will now go ahead on 1st November and that the department looked forward to improving the protection of those gambling in Britain.