Italian poker player Gianluca Speranza takes a commanding lead into the final day of the €1,090 NL Hold´em Championship at the WSOPE in Cannes. 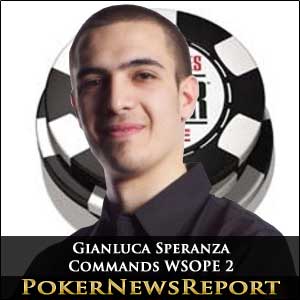 Italian poker player Gianluca Speranza takes a commanding lead into the final day of the €1,090 NL Hold´em Championship at the WSOPE in Cannes.

With nine players remaining in the event, Gianluca Speranza has almost a third of the chips in play, with only one other player – Day 1 chip leader, Andrew Hinrichsen – having a chip stack above the average. Speranza will be joined at the final table by compatriot Tarcisio Bruno, but possibly a bigger threat to his first success outside of his native Italy will come from two UK poker players – John Eames and Roberto Romanello.

Roberto Romanello has been a feature on the UK poker circuit for many, many years, but has only recently reaped the rewards he deserves. Winning the EPT Main Event in Prague last December and the WPT Main Event in Bratislava in March has given him the opportunity to become the UK´s latest Triple Crown winner, and Roberto´s triumph (should he win this event) will be unique inasmuch as all three legs will have been achieved in Europe. Roberto has come a long way since his first recorded final table appearance – the £300.00 Welsh Open in Swansea in April 2006 – and we wish him every success in his quest.

A Day of Mixed Fortunes and Mixed Chip Leaders

Throughout the day, it was impossible to determine who was likely to survive and who would be leaving the poker game with a resigned smile and a modest cheque. Great hands were cracked and amazing bluffs were pulled in a quick-fire start to proceedings which saw the field of 104 reduced to 81 (the bubble) in little over an hour. One of the “unlucky” ones was November Niner Eoghan O´Dea, who got his A♠ A♦ cracked by Ricardo Pereira´s A♣ K♠ when two Kings flopped on the board. That hand gave Pereira a temporary chip lead, until John Eames (K♠ K♣) crippled Jackson Su (A♠ K♦) and Gianluca Speranza put his head in front for the first time by hitting a diamond flush to damage Toby Lewis´ aspirations.

With 40 players left in the event, it looked as if Carlo Savinelli would be the Italian to fear, as the Slovenia Open winner took a massive three-way pot with a backdoor flush, but he was busted by Roberto Romanello in 15th when Romanello caught a pair of Aces of the flop to send Savinelli (K♠ K♣) to the rail. Romanello´s lead was not to last long, as overnight chip leader Andrew Hinrichsen eliminated William Koks (18th), Ricardo Pereira (14th) and Julien Varin (12th) to haul himself back in front, and then Speranza regained the lead when he flopped a full house to grab half of Romanello´s chip stack and take a commanding lead.

The game might not still be all about Speranza, Hinrichsen and Romanello. US poker player, Eric Baudry, came close to winning a WSOP bracelet in Vegas in June, and the two short stacks at the table – Gregory Lejolivet and Bernard Guigon – have already shown that they are not scared of running their stacks into the big boys. John Eames may also be offended as being counted among the supporting cast, with live tournament cashes in twelve different countries, and although Nabil Nedjai and Tarcisio Bruno were very quiet in the run up to the final table, they have sufficiently high stacks to create some damage to the chip leaders.

Chip Counts for the Final Table

When play resumes this afternoon, the blinds will be 3,000/6,000 (ante 500) and the first player out will receive €13,982. The winner will receive a cheque for €148,030, so possibly even the short stacks of Gregory Lejolivet and Bernard Guigon may take their time while the table is full handed to pick their spots and attempt to double up.