Get Your Seat in the PokerNewsReport Winning Millions Freeroll

PokerNewsReport has teamed up with Americas Cardroom to host a “Winning Millions” freeroll tournament that has six $22.00 satellite seats up for grabs. 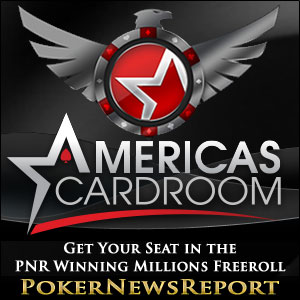 PokerNewsReport has teamed up with Americas Cardroom to host a “Winning Millions” freeroll tournament that has six $22.00 satellite seats up for grabs.

Americas Cardroom´s “Winning Millions” tournament is the most valuable online poker tournament available to players from the US since 2011. With its $1 million guaranteed prize pool and a minimum of $200,000 for the winner, the event has justifiably attracted a lot of interest.

The $540.00 buy-in tournament is the feature event in Americas Cardroom´s “Online Super Series IV”, which starts later today, and which includes sixty-three events with combined guaranteed prize pools of $1.75 million.

Americas Cardroom has been running a comprehensive satellite schedule into the “Winning Millions” tournament for several months, and now PokerNewsReport has teamed up with the leading US-friendly poker site to offer our readers the chance to get a seat in the December 14 event – for free!

The PokerNewsReport Winning Millions freeroll takes place this coming Sunday December 7 at 17:30pm (all times ET) and it will reward the top six players with a seat in the $22.00 Winning Millions sub-satellite that gets underway at 17:45pm (don´t worry – the target event has an hour of late registration).

In “our” tournament, players start with 2,000 chips and a fairly steep blind structure (levels last 10 minutes each). Players can register for the freeroll up to thirty minutes after it has started, but you will need a password to enter for the event – the password being “pnrmillions7”.

Players who qualify through the PokerNewsReport Winning Millions freeroll will be instantly entered into the $22.00 sub-satellite, which has two seats guaranteed into the $109.00 satellite at 20:30pm. The $109.00 satellite guarantees a minimum of one seat into the Winning Millions tournament; so, in the space of six hours, it is possible to go from zero to being in with a chance of a $200,000 payday!

If you fail to qualify through the PokerNewsReport Winning Millions freeroll, there are still numerous opportunities to qualify for the feature event over the next week. Americas Cardroom is increasing its satellite schedule throughout the coming week to qualify as many low and mid-stakes players as possible for the December 14 event.

The tournament itself will get underway at 15:00pm, with players getting a starting stack of 10,000 chips and a very gentle blinds structure. Late registration is available for five hours (twenty levels) and if you bust out early you have the opportunity to re-enter if you bankroll can stand the hit!

Despite the comprehensive satellite schedule and the extended late registration period, there is likely to be a significant overlay in the Winning Millions tournament. To date, fewer than four hundred players have qualified for the tournament and although we expect that figure to more than double, it is conceivable that Americas Cardroom could be looking at an overlay approaching half a million dollars!

What Else is Happening at Americas Cardroom?

Americas Cardroom is not short of promotion at the minute. In addition to the Online Super Series mentioned above, the site is hosting two “Mid-Stakes” Cage events tonight – a four-hour cash game/tournament with a buy-in of $525.00 – while the next “Full” Cage (buy-in $5,100) takes place next Wednesday December 10.

The site is also continuing its “Beast” rake race promotion and “Sit n Crush Reloaded” promotion and, up until December 31st, offering a three-tier $1,000 reload bonus to existing players who want to top up their accounts in time for Christmas.

Fancy a $2,000 Bonus from Americas Cardroom?

Players who do not yet have an account at Americas Cardroom – and who are quick to act – could, in theory, take advantage of Americas Cardroom´s first deposit bonus and the reload bonus to get $2,000 in bonuses before the end of the year.

Details on clearing the first deposit bonus can be found in our review of Americas Cardroom, and for more information about the Americas Cardroom bonus code for the reload offer, please visit our dedicated news article.