Get Ready for Big Money Sunday at Carbon Poker

This coming Sunday is “Big Money Sunday” at Carbon Poker, with more than $500,000 guaranteed in prize money across six different tournaments. 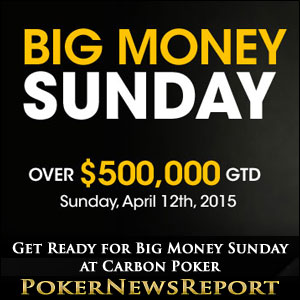 This coming Sunday is “Big Money Sunday” at Carbon Poker, with more than $500,000 guaranteed in prize money across six different tournaments.

If you enjoy playing in big money tournaments, there is no better place to be than Carbon Poker this coming Sunday (April 12). The site is hosting a series of “Big Money” tournaments which consists of six events with buy-ins ranging from $11.00 to $530.00.

Players with limited bankrolls have the opportunity to satellite into the feature tournaments through a series of turbo and hyper-turbo qualifiers already running in the Carbon Poker client, and – because of Carbon Poker´s excellent mobile software – you don´t even having to be sitting in front of your computer to get involved.

The schedule for Big Money Sunday has been purposefully designed so that the tournaments overlap with each other – allowing as many players to get involved as possible. Although all of the tournaments are played using the NL Texas Hold´em format, there are some differences between the events that players should be aware of:

There are satellites into the Big Money Sunday tournaments taking place throughout the weekend. Tonight and tomorrow night there is a satellite into the $215.00 buy-in Big Money event taking place at 7:00pm (ET) that has a buy-in of $11.00 and guarantees a minimum of three seats into the target event; while players hoping for a cheap seat into the $530.00 “Super-Deepstack” event should try Saturday´s re-buy qualifier which gets underway at 5:55pm (ET) and has a buy-in of $33.00 (Three seats guaranteed).

For players who wish to contain their Big Sunday action to within one day, Carbon Poker is hosting a series of turbo and hyper-turbo satellites on Sunday afternoon, which should give players plenty of time to grab a sandwich before the target events gets underway. Because we don´t like hyper-turbo games, we have selected what we believe will be the best of the turbo-satellites:

Want a Slice of the Big Money for Yourself?

If you are not already playing at Carbon Poker, you should be. Carbon Poker has some of the softest cash game tables and beatable tournaments of any US-friendly poker site. You don´t have to take our word for it though (although you have to download the software before you find out that we are correct)!

This is not because players get fewer chips or play shorter levels at Carbon Poker. It is because of the speed at which loose players get busted and sent back to play in the online casinos from where they first originated (or the sports books or the race books).

Visit Carbon Poker today and create an account using the Carbon Poker bonus code “CARBONPK”, and you will qualify for a 100% match bonus on your first deposit of up to $1,000 – almost enough to enter all the feature tournaments in Carbon Poker´s “Big Money Sunday”!