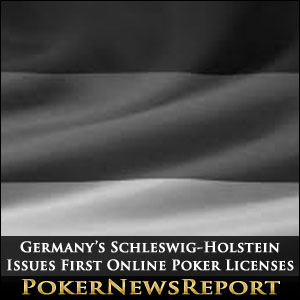 Twelve operators were issued licenses by the German state of Schleswig-Holstein, allowing the licensed companies to offer online casino games and poker. These are the first licenses for online gaming other than sports betting that have been issued by the state.

Licenses went to 888, Ladbrokes, Betfair, REEL, the subsidiary of PokerStars, ElectraWorks, a subsidiary of Bwin.party, Bet365, MyBet and Bet-at-home, among others.

The new licenses have added to the state of confusion in Germany with regards to online casino and poker. Recently released Federal online gaming regulations do not permit online poker and restrict the number of online sports betting licenses that can be issued. This was ratified in July by 15 of the 16 German states.

The licenses should allow any German player to visit the site. Licenses will be valid for a period of six years. There are certain stipulations to ensure the security and safety of the sites. Operators are required to indicate the security level of their IT infrastructure. Online casinos are required to notify players of their wins and losses via “hourly reality checks” and online poker bots are not legal. Once these stipulations have been met, the sites will be able to offer online casino and poker games.

Eighteen casino applications and twenty four sports betting application still await processing. While the new coalition government has considered repealing the licenses, it has admitted that it is not legally able to do so.

Regarding the new gambling law, the new German coalition government plans to stand with the State Treaty and work towards repealing the law.

However, the regulations by the Schleswig-Holstein government have been approved by the EU Commission, while the Germany State Treaty has been deemed illegal under EU law. Germany has been directed to prove that its online poker ban under the State Treaty is valid and the EGBA has formally complained to the European Commission about the Treaty.