The German state of Schleswig-Holstein yesterday became the first of the country´s regional authorities to legalise online gaming. 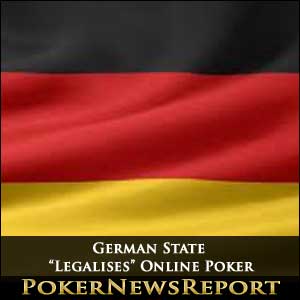 The German state of Schleswig-Holstein yesterday became the first of the country´s regional authorities to legalise online gaming.

The move, which is anticipated to open up the whole of the German online poker market, pre-empts the Government´s efforts to introduce a new German State Gambling Treaty before the current regulations expire in December.

Previous to Schleswig-Holstein´s legislative move, the country as a whole has followed the national policy of banning online gambling – a policy which was originally put in place to protect the Government´s monopoly on lotteries and sports betting – however an estimated 2.2 million Germans already have “offshore” accounts with a number of [geolink href=”https://www.pokernewsreport.com/online-poker-rooms”]online poker sites[/geolink] and other sports betting operations.

It will be a Happy New Year for gaming residents of Schleswig-Holstein who will be allowed to legally play online poker from the 1st January 2012 subject to companies who wish to supply their products being licensed in time. Betfair and Bwin/Party have already indicated that they will be at the front of the queue, despite a 20 per cent tax on operating profits, and there is no doubt that PokerStars will not wish to lose their market share in the area.

It is hoped that the new legislation is adopted by the 15 other German states before the end of the year in order that all German citizens have the opportunity to legally engage in online poker. This will encourage more players to try their skills on the licensed sites and expand the player base for other European online poker players, who have experienced a fall in online competition since Black Friday.

Both Betfair and Bwin/Party saw their share values rise with the news of the new legislation, and Betfair issued a formal statement to welcome the changes to the law. In the statement the company said “Betfair is committed to participating in the online gambling market in Germany, ready and willing to pay taxes there and offer German consumers competitive, innovative and safe products.”

They continued, “The resolution passed today is an important and groundbreaking step on the way to an open and regulated gambling market in Germany. We are now hopeful that the other 15 German States will make the regulated amendments to their proposed State Treaty, in order to bring it into line with EU law.”