Rettenmaier has been quickly snapped up by Team Party Poker as newest member of their line-up after he only recently quit Titan Poker. 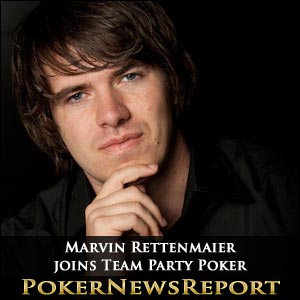 Marvin Rettenmaier has been quickly snapped up by Team Party Poker as the newest member of their line-up after he only recently quit Titan Poker, with the German saying that it feels like a natural move for him.

The London-based university graduate – who has proved himself to be among the best of European talent, as well as something of a party animal – will join the likes of Mike Sexton, Tony G, fellow German Bodo Sbrzesny, Kara Scott, Dragan Galic and Tomeu ‘Amatos’ Gomila as part of Party Poker’s list of sponsored players.

Rettenmaier – who was unveiled as the latest Team Party Poker Pro during the WPT World Championship at The Bellagio in Las Vegas – said: “I am pleased to join Team Party Poker. It feels like a natural move for me and I am looking forward to representing them in WPT events and beyond.”

Of course, Rettenmaier was previously a Team Titan Poker member, but – like Englishman Sam Trickett – quit just a few weeks ago as the poker room initiated a mass clear-out.

Tara Scott Looking Forward to Some Karaoke With Team-Mate

However, Party Poker wasted no time in persuading the German to join their team, promoting fellow Pro member Scott to say: I am so stoked to welcome Marvin to Team Party Poker. He is a seriously talented poker player, which makes his addition no surprise at all.

He will certainly be a popular addition to the team, with Scott adding: On top of that, though, he is a friend and one of the most fun people to hang out with on the poker circuit. I am looking forward to many more nights of karaoke, ‘Mad Marvin’ style!

It is great to have Marvin on board. I have always said he is a player of true character. He has the Germanic mathematical game and he has heart, he is winning, he gets drunk, he loses his passport – he is also running good.

He needs my guiding hand. If anybody other than ‘my son’, John Eames, was to get a deal, it would have to be ‘Mad Marvin’.

Finally, the elder statesman of the team, 64-year-old Sexton, believes Rettenmaier – who gained his degree in management and business law – is just what the world’s greatest game needs. The one-time World Series of Poker (WSOP) champion added: Poker needs characters and Marvin is certainly one of those. I think he will be an asset and I am delighted that he has joined the team.