The EPT Prague High Rollers attracted a record 169 entries for the €10,000 buy-in tournament and, at the end of Day 1, the event was led by Georgios Karakousis. 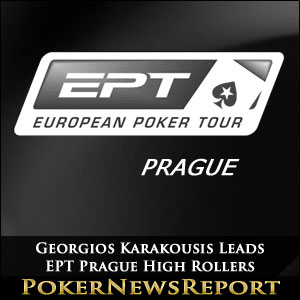 The EPT Prague High Rollers attracted a record 169 entries for the €10,000 buy-in tournament and, at the end of Day 1, the event was led by Georgios Karakousis.

For many players, the High Rollers Events are the highlights of the European Poker Tour series and, rather than take their chances among the hundreds who contest the Main Events (actually 1,007 in the EPT Prague this year), some prefer the “qualifier-free” environment of the higher buy-in tournament.

However, this year´s EPT Prague High Rollers tournament is more popular than ever – attracting 135 unique entries and 34 re-entries – and with late registration/re-entry open until this morning, there could be a number of players who cashed in the EPT Prague Main Event boosting the number of entries still further as they attempt to spin up their winnings.

The High Roller Events are also a good place to find the “stars” of the poker world. The entry list for the EPT Prague High Rollers included PokerStars professionals Vanessa Selbst, Isaac Haxton and Eugene Katchalov, while Steve O´Dwyer and Jonathan Little forwent the option of playing in the bwin WPT Prague (along with several others) to participate in this tournament.

The player who was runner-up to Robin Ylitalo in the EPT London Main Event – Georgios Karakousis – leads the High Rollers at the close of Day 1. Karakousis finished fourth in last weekend´s Eureka High Rollers Event and he established quite a lead during 9 levels of play – finishing the day with 407,200 chips after a stunning last level.

Behind Karakousis, Dmitri Yurasov (332,600 chips) and Max Heinzelmann (268,300 chips) both had a good day at the tables, without getting involved in many substantial pots against the feature “stars”. Heinzelmann recovered from a small tussle with Bertrand “ElkY” Grospellier, in which his pocket Fives failed to improve past Grospellier´s pocket Queens, and that was the only hand of note recorded which featured any of the top three leading players.

Looking Ahead to Day 2 of the EPT Prague High Rollers

With registrations still open for the EPT Prague High Rollers Event, Day 2 of the tournament could see a massive field develop. Organisers already scheduled this event for three days after a massive turn-out for last year´s event, but with 84 players advancing from Day 1 – and more likely to join them this morning – two more days of action may not be enough to determine a winner. Initially the plan was to plan down to a final table of nine players – but expect that to change as the day progresses.

It is more than likely that a further nine levels of play will take place on Day 2 of the EPT High Rollers and when players take their seats at the Prague Hilton, they will be facing blinds of 800/1,600 (ante 200). Players re-entering or late registering will get a starting stack of 50,000 chips – enough to make a charge towards the top spots on the High Rollers leaderboard, which are currently occupied by: