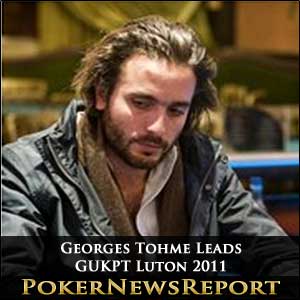 The chip stack of UK poker player Georges Tohme is the target for the remaining eighty players when Day 2 of the Grosvenor UK Poker Tour (GUKPT) resumes today, after Georges stormed into an early lead in the £214,000 Main Event.

Georges, whose best GUKPT finish was seventeenth in the GUKPT Grand Final in 2010, bagged almost 40,000 chips more than his nearest rival when play concluded early on Saturday morning.

Georges stack is way ahead some of the stars of UK poker who turned up to support the event. Previous GUKPT winners Praz Bansi and Alan Mansbridge  made it into Day 2, and they will be joined by (amongst others) James Akenhead, Matt Perrins, Julian Thew, Andrew Teng and Sam Razavi. Those who were on an early trip back down the M1 to London included Neil Channing, Liv Boeree and Jake Cody.

Neil Channing, who won this event last year, was looking forward to a good tournament following his deep run in Edinburgh last weekend but was one of the players to run into an inspired Georges. Despite a good start, Neil lost five consecutive pots to go, in his words, “from prince to pauper”. Not all of Neil´s chips went to Georges, but he was one of the major beneficiaries!

The GUKPT Luton Runners and Riders

As well as the more familiar faces that took their seats at the G Casino in Luton, a total of 214 poker players entered the Main Event in two tiers which started at 12.00 noon and 6.00pm. Both tiers played eight one-hour levels, and 81 players will return at 2.00pm on Saturday to play eight more. The tournament concludes on Sunday, when a new GUKPT Champion will be crowned.