George Turns the Heat On in GukPT Student Championships

George Heaton emerged as the closest challenger to runaway Day 1A chip leader Andrew Symeou after Day 1B of the GukPT-sponsored UK Student Poker Championship. 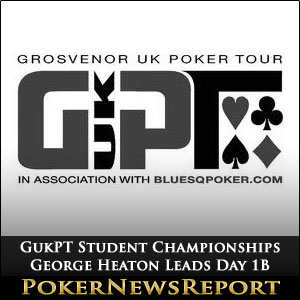 George Heaton emerged as the closest challenger to runaway Day 1A chip leader Andrew Symeou after Day 1B of the GukPT-sponsored UK Student Poker Championship.

Although Heaton is still a long way behind Day 1A chip leader Symeou, his game was more consistent – taking an early chip lead by the end of level 2 and then using his commanding stack of chips to steal pots with hands such as Q3o and K7o. However, elsewhere in the G Casino, players were getting sucked out left, right and centre:-

So Young to Learn that Life is Not Fair

Experienced poker players everywhere should feel sorry for young Jody Hall this morning. After nursing her chips through to the end of Level 8, Jody got her stack into the pot pre-flop with A♥ A♦ and found two callers – David Chatterjee holding J♠ J♦ and Darren Parker – who had just sat down to play his first hand of the tournament – with 10♥ 2♠.

Incredibly, the board ran 9♥ 8♦ 10♣ / 2♣ / K♣ to give Parker an unlikely treble-up in his first hand. Jody won the side pot of 9,000 chips, while David Chatterjee was crushed down to his last 6,000 chips. Not so incredibly, none of the three players involved in that hand made it into Day 2 of the UK Student Poker Championships.

Hi-Roller Winner Survives Despite No Luck

Simon Pridiss – the winner of the UKSPC Hi-Roller event played on Tuesday – survived to make Day 2 despite getting sucked out in his first entry (KK < Q10 after the Q10 made runner-runner two pairs) and then nearly blowing all his chips soon after having re-entered.

Pridiss recovered to finish the day with 49,575 chips, slightly behind Newman´s 52,050 stack, but there will be no re-appearance today for last year´s UKSPC winner – Lewis Hield – who confessed to being card dead all day and out of frustration called a Q♣ Q♠ shove with 10♦ 10♠. Sadly Hield, who won £2,190 for his victory last year, could not hit the set he needed to stay alive and was busted from the tournament.

Yesterday we mentioned about the fierce rivalry which exists between the 40+ university poker societies which take part in the UK Student Poker Championship. Day 1B crowing rights belonged to the University of Central Lancaster Student Union Poker Society (UCLan SU) who, in addition to being the home of Day 1B chip leader George Heaton, also have six other players still alive in the Main Event.

Unfortunately their maths skills are not as good as their poker skills as their celebratory Tweet 7 people left from UCLan at the Main Event of the UKSPC, 10% of the field failed to take into account that there are just over 100 players returning for Day 2 at the G Casino this afternoon and (for any other students reading this) that would imply that UCLan players comprise just under 7% of the remaining players!