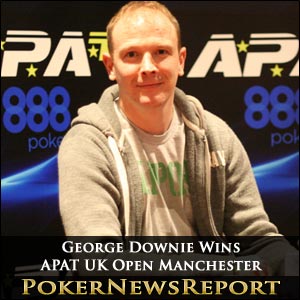 Home favourite George Downie picked up £3,300 (or about $5,150/€3,850) after winning the Amateur Poker Association and Tour (APAT) 888 Poker United Kingdom Open in Manchester.

With the final table set, there were to quick eliminations when Jason Talbot and Jason Jones exited in ninth and eighth for £270 and £355 respectively.

Talbot, in the very first hand of the final table, was all-in with tens, only to be faced by the A-K of John Anderson. When a king arrived on the turn, Talbot was out.

Not long after, small blind Jones exited in eighth. He raised with pocket kings and was called by big blind Andrew Thompson, who held 6-5. The latter flopped two pair and then saw that turn into a full house to eliminate Jones.

Thompson managed a double knockout in a later hand, when Steve Harrison and Abdul Hafeez crashed out.

Harrison limped his pocket kings, most certainly looking for some action and the opportunity to double-up. Small blind Thompson and big blind Hafeez checked, only for the former to flop trip eights.

Incredibly, Hafeez managed to pick up a three fives, but that wasn’t good enough and he left the tournament in seventh for £475 while Harrison was out in sixth for £595.

This final table was becoming a thrilling affair and, when Anderson raised big when holding pocket aces, he received a call from Yangran, who had a suited ace.

The Chinese player flopped the nut flush, called the flop and turn cards, and then shoved all-in to take over half the chips at the table while sending Anderson out in fifth place for £775.

Four-handed play was somewhat slower, but Downie did take down a huge pot when his aces held against Yangran’s kings. Now in front, Downie was never again to relinquish the lead as he powered to glory.

Thompson – now the short stack – exited the event in fourth for £980, although he did manage to hang on for quite some time, even making it into the next level before crashing out.

The unfortunate Thompson – in the big blind – chose the wrong spot to go all-in, however, as his 9-4 was met by the aces of Laura Pahomova.

Just three players remained now, and they agreed a deal that resulted in massive chip leader Downie taking the biggest chunk of the remaining cash on offer.

But he still managed to eliminate Pahamova in third place for £2,185, before beating out Yangran in their heads-up clash as his A-5 held up when encountering K-7. Yangran also left with £2,185 as runner-up.

Downie, of course, took home the biggest prize, but he also won a seat for a live 888 Poker event as well as the APAT National Gold Medal crown.

The next stop on the APAT will be at Brighton’s Rendezvous Casino for the £75 buy-in 888 Poker European Amateur Poker Championship and runs from January 21 to 22.

Similar to Downie, the Brighton winner will collect a trophy, medal, prize money, and a seat at the 888 poker SuperStack in Birmingham’s Star City in late February.

There will be qualifying satellites running for the European Amateur Poker Championship this month at 888 Poker and are as follows (all times UK):