The SkyCity Casino witnessed one of the fastest final tables, as Geoff Smith demolished his opponents in under 4 hours to win the ANZPT Auckland Main Event. 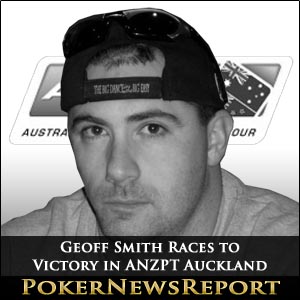 The SkyCity Casino witnessed one of the fastest final tables ever, as Geoff Smith demolished his opponents in under four hours to win the ANZPT Auckland Main Event.

Geoff Smith turned a major chip disadvantage into an ANZPT trophy and NZ$ 80,502 after racing through his opponents on the final day of the PokerStars sponsored ANZPT Main Event in Auckland. As play started at the SkyCity Casino on Sunday, Jamie Mulligan held a commanding chip advantage over the rest of the table, but that advantage was quickly to be eroded.

Harji, Eastick and Smith all Climb

Before one circuit of the table had been completed, Pravin Harji had captured all of Patrick Healy´s chips after Healy had shoved from mid-position with 7♥ 7♣ and run into Harji´s J♥ J♣, and soon after Monica Eastick took control of Graeme Putt´s short stack when her 8♠ 8♥ rivered a straight against Putt´s A♣ K♦.

The last remaining short stack, Xiaodong Xia, was the next to leave the table – running his J♥ J♦ into the A♥ A♣ of Jamie Milligan, and Geoff Smith so nearly joined him a few hands later – calling Miroslav Sheynin´s (Q♦ 6♦) shove with 10♦ 8♦ on a flop of 5♦ 9♦ J♥. The turn J♣ and river Q♥ gave Smith a straight and enabled him to soar up to the top of the leaderboard.

Sheynin was to depart a few hands later – running his A♦ 6♦ into the A♠ Q♦ of Pravin Harji – and then Jamie Milligan – who had previously given Sebastian Martineau an important double up – took a chance with K♠ 4♠ only for Monica Eastick to wake up in the big blind with A♦ A♥.

With five players having been eliminated in the first two hours of play, and the four remaining players being closely stacked, a deal was made which would see each of the players guaranteed NZ$55,000 – leaving the title, the ANZPT Main Event trophy and an addition NZ$25,000 to play for. Thereafter, it was all about Geoff Smith.

Geoff Smith Wraps it Up on the Double

Within 15 minutes of the deal being agreed, Monica Eastick was the first player to be dispatched the rail by Smith – her 10♣ 10♠ failing to improve against Smith´s A♥ A♣ – and Pravin Harji was soon to follow her in third – this time in an 8♦ 8♠ < Q♠ Q♥ showdown.

Geoff Smith took a 3 million v 1 million chip advantage into the heads-up against Sebastian Martineau but it looked as if the two chip stacks were going to be level when Martineau (J♦ 3♣) called Smith´s (K♥ J♣) shove on the board of 6♥ J♠ 4♦ / 3♠. Fortunately for Smith, the 4♥ on the river gave both players two pairs (Jacks and Fours), but he won the hand – and the tournament – by virtue of his K♥ kicker.