With the Edinburgh leg of the Genting Poker Series just ten days away, Genting Casinos are hosting a series of added-value satellites this week. 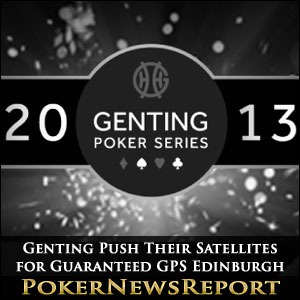 With the Edinburgh leg of the Genting Poker Series just ten days away, Genting Casinos are hosting a series of added-value satellites this week.

Last year´s GPS Edinburgh was a storming success, with 387 players qualifying online or ponying up the £430.00 buy-in to compete in the Main Event – won by Glasgow poker player Paul McTaggart, who collected £32,685 for his victory after a heads-up chop with Paul “Action” Jackson.

This year however, organisers of the tournament seem to be getting a little twitchy about the £100,000 guaranteed prize pool, and have scheduled five super satellites into the next week´s online action which guarantee fifty seats into the GPS Edinburgh Main Event.

Each of the Super Satellites has a £50.00 + £5.00 buy-in and will kick off at 8.00pm (BST) on GentingPoker.com. Players will receive 4,000 starting chips and late registration is available for 10 levels (two hours). Those with limited bankrolls – or stacks of Genting Poker Points – can qualify through online feeders to the Super Satellites, which have started running on the site already.

Players living close to a Genting Casino (particularly the one on Edinburgh) are also advised to check and see what special offers their local brick and mortar venues are promoting, however those with bags of confidence should roll into Edinburgh early for the first event of the Edinburgh Festival – a £33.00 buy-in Super Re-Buy Satellite with ten seats to the Main Event guaranteed.

A handful of side events completes the full Genting Edinburgh program, which looks like this:-

Please note that the fee for playing in the GPS Edinburgh Main Event has gone up £10.00 this year and that the tournament is a re-entry event, which players having the option to re-enter (once only) up to Level 9.

Two Legs of the Series Left

While Edinburgh might be a long way for some players to travel (especially if you live in Brazil), the penultimate leg of the series takes place online over three days from Sunday 17th November. This event also has a £100,000 guaranteed prize pool for a £440.00 buy-in, but last year only just managed to meet the guarantee when Keith Bartholomew topped the field of 250 players to collect £25.000.

The Grand Final of this year´s series takes place in Sheffield between Thursday 12th and Sunday 15th December and has a guaranteed prize pool of £200,000 (buy-in £880.00). Last year Elliott Panyi enjoyed an early Christmas present when collecting the £66,900 first prize for wiping out a field of 176 opponents.