Genting Poker has revealed several “logical” changes to their tournament series that kicks off next year. 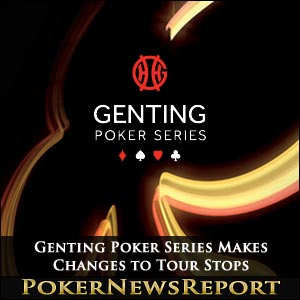 Genting Poker has revealed several “logical” changes to their poker tournament series that kicks off next year.

The Genting Poker Series announced recently that seven stops would be included on the tour, but have now made alterations to the original data sent out to the world, with leg two of the series moving from Genting Club Southend to London’s Fox Poker Club.

The London stop on the tour is almost certain to provide additional side events, such as Pot-Limit Hold’em and H.O.R.S.E. poker.

Genting Poker’s poker manager Gary Oakes is happy with the move, stating: “The Fox Poker Club is in a great location and has a terrific player base.

“As the latest edition to Genting Casinos, it was a logical move for us to bring an early leg of the series to the capital and, with a £100,000 guaranteed prize fund, we are sure this will be a sell-out event with Fox Poker Club members.”

Other series changes come in legs six and seven. The sixth stop is an online tournament at Genting Poker – the biggest casino British operator and one of the world’s largest gaming and leisure businesses – and has been moved from November 10-13 to November 8-11, but will still be a £400+£30 No-Limit Hold’em tournament.

Some of the venues in the series have played host to big tournaments already, with the Palm Beach entertaining the World Poker Tour (WPT) London Poker Classic, while Stoke’s Genting Club holds many of Britain’s top tournaments, including the renowned Anniversary Cup.

The Anniversary Cup will be incorporated into the fourth stop on the tour, when it pulls into Stoke from August 1-5.

The other stops on the tour are in Birmingham’s Star City (from February 1-5), Edinburgh’s Genting Club Fountain Park (May 30-June 3) and Sheffield’s Genting Club (September 26-30).

Every one of the six live tournaments of the series will have a TV Table, which will be streamed on a small delay over the internet.

The legendary ‘Mad’ Marty Wilson will host and commentate on the live shows and is sure to be joined by a host of celebrities and pros.

Wilson, who has a most distinctive delivery, has been playing poker for decades now and, while best known as a tournament director, commentator and host, it should be remembered that the 53-year-old has also accumulated nearly $500,000 in career tournament winnings.

His biggest success came back in 1998, however, when Wilson collected $171,000 for winning the Carnival of Poker tournament at the Rio All-Suite Hotel & Casino in Las Vegas.

One thing is guaranteed, Wilson’s commentary will be enjoyable, well informed and enthralling – particularly if he avails viewers of some of his ‘Mad Marty’ stories.

The 2012 Genting Poker Series schedule as it stands: