The British live poker scene is already packed out, but that hasn’t stopped Genting Poker from introducing their own tour next year. 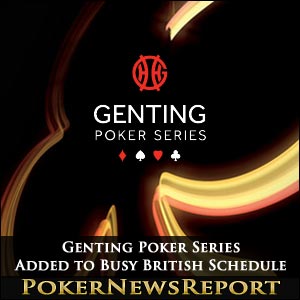 The British live poker scene is already packed out, but that hasn’t stopped Genting Poker from introducing their own tour next year.

Seven events have been included on the Genting Poker Series scheduled, kicking off in Birmingham’s Star City from February 1-5.

Then comes an online leg from November 10-13, before the tour ends at London’s Palm Beach Casino, Mayfair, for the Grand Final from December 7-11.

Players will be given 25,000 starting stacks on a one-hour clock, while numerous side tournaments have been planned with buy-ins starting as low as £100 ($156/€116), as well as cash games.

But Genting Poker have also created a first with their online sixth leg. This event will feature the same tournaments as the other legs, but, because of the speed of online poker, each event will last just one day.

All six live events will feature a TV Table, to be streamed on a short delay on the internet, while ‘Mad’ Marty Wilson will host the live shows and be joined by numerous pros and celebrities.

The Quad Aces feature will see the first entrant in any live main event to have their four aces defeated by a straight flush handed a Bad Beat Jackpot prize that offers a £10,000 ($15,583/€11,637) sponsorship package that includes entry to the Grand Final, while the Flopped Aces special will assure every player at a table that shows A-A-A on the flop is given a seat at the next £400+£30 main event.