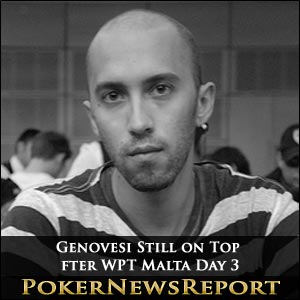 At the conclusion of Day 3 at the WPT Malta Main Event it was a case of déjà vu, with Jackson Genovesi leading the final six players onto the final table ahead of Yorane Kerignard – the only other player to finish with more than a million chips – with Sampo Ryynanen hunting the pair up in third. However, for much of the day Genovesi leaked chips like a sieve – his love of seeing every flop almost proving his downfall – and only the fortunate bust of Jonathan Roy when play was nine-handed enabled the Italian to regain top position in the chip counts.

For much of the day the battle of the chip counts was being fought between France´s Yorane Kerignard and Germany´s Serkan Kurnaz – with the latter only starting the day with 139,500 chips but being the first to pass the million chip mark after the eliminations of Valeriy Chupin in seventeenth (A♣ K♠ > J♣ 9♣), Daniele Mazzia in fifteenth (Q♥ Q♠ > A♠ Q♣) and Eros Nastasi in thirteenth (J♦ 10♣ > A♣ 10♦ when J♥ was turned). Unfortunately for Kurnaz, his Q♣ Q♠ were no good in the last hand of the day when Yorane Kerignard called his shove holding A♣ 2♠, and the dealer delivered 5♥ 5♠ 2♣ / A♥ / 3♦. Kurnaz was eliminated in seventh, while Kerignard cemented his place behind Jackson Genovesi.

As mentioned above, Genovesi was not having a good day. Tony G, who eventually finished in tenth, enjoyed an early double up (10♣ 10♠ > J♥ 7♥) against the chip leader who spent much of the first five levels limping into pots whenever possible, and failing to connect or being forced out of the hand. His elimination of Ilan Boujenah (A♥ K♥ > A♠ 10♥) had provided him with sufficient chips to maintain a mid-table position until he enjoyed a major stroke of good fortune against Jonathan Roy.

The four other players that will compete on the six-handed final table today are Sampo Ryynanen – whose Aces bust out Jack Salter in eighth position and who will have position on Genovesi at the table –  Alessio Isaia, who started Day 3 of the WPT Malta strongly but was missing from action by the close of play, Hui Chen Kuo, the first female poker player to grace a WPT final table in living memory, and Zeljko Krizan – who may well struggle to improve his position, having only eleven big blinds when play resumes later today at the Portomaso Casino.