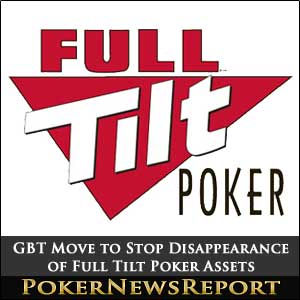 Although the liquid assets of Full Tilt Poker may not amount to a great pile of beans right now, prospective purchaser – Groupe Bernard Tapie – have included a clause to their conditional “acquisition agreement” to prevent what is left of the company walking out of the door with the departing shareholders.

The clause in the contract stipulates that an independent overseer be appointed to “green light” any financial transactions authorised by the existing board of directors other than day-to-day operating costs.

Groupe Bernard Tapie are apparently interviewing candidates for the position of Chief Restructuring Officer – the first responsibility of whom will be to protect what is left of Full Tilt Poker (and all their related companies) while negotiations for the acquisition of the company continue. The successful aspirant will effectively take over the role of the board of directors – having the final say in all managerial and financial decisions.

But Do Full Tilt Poker Directors Still Want to Sell?

Although the announcement of the “acquisition agreement” was ten days ago, the terms of the agreement have still to be ratified by the board of Full Tilt Poker. Under its corporate structure, owners controlling more than two-thirds of the shares in Tiltware have to agree on the deal and no vote has yet taken place – indeed, Full Tilt Poker´s CEO Ray Bitar has been busy trying to unfreeze his own personal assets, rather than focus on what happens to company he wrecked, and few people know the whereabouts of Chris Ferguson, Howard Lederer and the other members of the board.

A minor amendment to the statement issued last week by the Alderney Gambling Control Commission (AGCC) has quietly been introduced – one which could have a significant effect to a number of ex-Full Tilt Poker players who have contacted the regulatory authority. Despite announcing that they were washing their hands of the Full Tilt Poker affair, it would appear that the AGCC are still being contacted by many people owed money by the disgraced online poker company. Consequently, the AGCC statement now begins with the line “At the request of the police, AGCC will continue to log incoming player complaints: these records will be made available to the police”.

That should stop the phones ringing and allow the regulators of online poker to go back to sleep!