The Gibraltar Betting and Gaming Association (GBGA) has requested a judicial review of the verdict in its recent legal challenge against the UK Gambling Act. 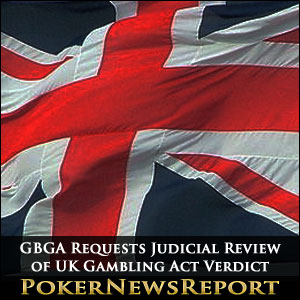 The Gibraltar Betting and Gaming Association (GBGA) has requested a judicial review of the verdict in its recent legal challenge against the UK Gambling Act.

Following its initial failed challenge against the UK Gambling (Licensing and Advertising) Act, the GBGA has requested a judicial review of the verdict passed down by Mr Justice Green earlier this month, claiming that the tax implications of the new legislation contravene Article 56 of the Treaty on the Functioning of the European Union (TFEU).

Whereas the Association´s gripe is based on the same area of European legislation as before, this time it has narrowed down its challenge to just the 15% point of consumption tax that its members will be liable for when they make a profit from a transaction with a UK-based player.

Why a Judicial Review and Not an Appeal?

There are two reasons why the GBGA has chosen a judicial review over an appeal. The first is that the cost of a judicial review is far less than an appeal, and the second is that the GBGA´s original challenge to the UK Gambling Act contained an alternative passport solution that Mr Justice Green found would fail to prove effective or achievable without significant bureaucracy or extra cost.

By eliminating the areas of their case which would be unlikely to succeed, and focusing on the areas of Mr Justice Green´s verdict which are still contentious, the GBGA believes it has a better chance of success. Consequently, the judicial review will be asked to consider specifically whether the point of consumption tax contravenes European law and not the whole of the UK Gambling (Licensing and Advertising) Act.

Has the GBGA Got a Reasonable Argument?

The area of Mr Justice Green´s verdict that the GBGA wants reviewed relates to the measures restricting the freedom to provide services between member states justified on purely economic grounds. In his verdict Mr Justice Green stated that a restriction designed to raise tax would be an economic objective and, as such, inadmissible as a justification.

The GBGA claims that the point of consumption tax is an economic objective and therefore should not be allowed. The Association has also alleged that the tax has the potential to encourage the black market as players leave regulated sites to play on offshore sites where companies not liable for the tax can offer higher value rewards.

In some respects the GBGA has a point. PokerStars has already announced that the rewards offered to UK players will decrease in value from January 1st 2015, and the most extreme consequence of restrictive measures can be seen in Spain – where almost half of the country´s online poker players choose to play on unregulated sites.

What Are the Possible Outcomes?

If the judicial review determines that Mr Justice Green´s verdict was justified, the judgement will be allowed to stand. If the verdict is unjustified, the review has the authority to quash the original verdict which will lead to the arguments being heard again.

This second scenario could delay the introduction of the point of consumption tax – which is scheduled to be introduced on 1st December – rather than delay the implementation of the UK Gambling Act, which comes into force on 1st November.