Implementation of the UK´s Gambling Act has been delayed by a month due to the court case brought by the Gibraltar Betting and Gaming Association (GBGA). 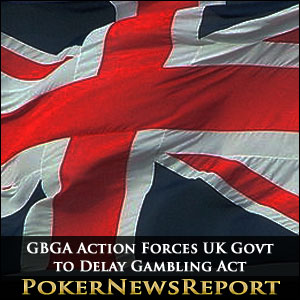 Implementation of the UK´s Gambling Act has been delayed by a month due to the court case brought by the Gibraltar Betting and Gaming Association (GBGA).

In yesterday´s PokerNewsReport, we reported that there was going to be a “Big Day Ahead for European Legislation” and we were not wrong – despite neither of the court cases we highlighted delivering a verdict.

The verdict of the European Commissioners in Royal Scandinavian Casino – v. Commission is still under review; while Lord Justice Green – who had been presiding over this week´s GBGA – v. – UK Gambling Commission at the Royal Courts of Justice – said that it was unreasonable to expect a verdict on the case before October 1st – the day on which the UK´s Gambling (Licensing and Advertising) Act was due to take effect.

With there being no resolution to the GBGA´s challenge of the new gambling legislation, the UK´s Department of Culture, Media and Sport announced that the implementation of the Gambling (Licensing and Advertising) Act would be delayed until 1st November to give Lord Justice Green time to consider his verdict.

Despite the GBGA´s legal action being considered speculative by many observers, the delay in issuing a decision on the case indicates that the legal challenge has some merit. If the judge finds in favour of the GBGA, the implementation of the Gambling (Licensing and Advertising) Act could be delayed further while certain sections of the Act are revised.

The main area of contention is the 15% “Point of Consumption” tax to be charged on the proceeds of remote gambling transactions with UK residents. The GBGA claims that this gives an unfair advantage to online gambling companies physically located in the UK and is contrary to European legislation regarding free trade between member states.

PokerStars Quick to React to the News

Having made preparations to migrate players to a new PokerStars UK platform on October 1st, PokerStars informed players that the migration – and the five $1,000 freeroll tournaments that were to herald the new UK platform – would also be delayed until November 1st.

[geolink href=”https://www.pokernewsreport.com/pokerstars”]PokerStars[/geolink] also updated their “Migration Q&A” to cover the changes to PokerStars.fr – which will cease to accept players from the UK from November 1st. Players using the French poker client must withdraw their funds and re-deposit them in the new UK client. PokerStars advises players who qualify for Stellar Awards and Milestone Credits to cash them in before 30th October, and request a transfer of FPPs and VIP statuses by contacting support@pokerstars.com.

Carbon Poker Leads the Exodus from the UK

Under the new UK Gambling Act, online poker sites can only apply for a license if there is a legal basis for their operations in jurisdictions where they may not licensed to offer online poker for real money. With Carbon Poker still providing an online poker service to many States in the US, they would fail this condition of a license and yesterday announced it was withdrawing from the UK online poker market.

In an email sent to poker players with a UK address, [geolink href=”https://www.pokernewsreport.com/carbon-poker”]Carbon Poker[/geolink] advised players to log into their accounts and request a withdrawal of their outstanding balances. Unlike PokerStars´ advice to its players, there was no mention of whether they would be credited for outstanding bonuses or VIP rewards and it is not known yet whether they will revise their withdrawal of service to 30th October following the decision to delay the implementation of the UK Gambling Act.