Sardor Gaziev acknowledged that he enjoyed plenty of good fortune on his way to victory in BFPO Event #12 – twice being just one card away from elimination. 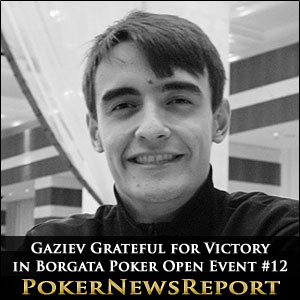 Sardor Gaziev acknowledged that he enjoyed plenty of good fortune on his way to victory in BFPO Event #12 – twice being just one card away from elimination.

The twelfth event of the Borgata Fall Poker Open Series was a $500.00 + $60.00 buy-in 6-Max NL Hold´em tournament which attracted 237 entries and created a prize pool of $118,500. The 24-player money bubble burst late on Saturday night, when Vinny Mazzaferro (K♦ K♣) flopped a set of Kings to crack Patti Hagerty´s pocket Aces, and eighteen players returned on Sunday to play down to a winner.

After five hours of action, the final table of six was set; with overnight chip leader Jon Sorscher still leading the field, having increased his chip stack from 445,500 to 1.3 million. However, with blinds of 12,000/24,000 (ante 2,000), Brandon Fisher was in serious danger of a quick elimination.

Ace-King Not a Good Hand to Hold

Incredibly, Brandon Fisher clung onto the last of his chips for almost an hour before being unlucky to be eliminated from the Borgata Fall Poker Open Event #12. Having got the last of his chips in with Ace-King against Tom Dobrilovic´s suited Ace-Five, Brandon Fisher looked good for a double-up. However, the cards had other ideas – pairing Dobrilovic´s Five on the flop and completing his Flush draw on the River.

Mark Sykes lasted a further forty-five minutes before running his pocket Eights into Sardor Gaziev´s pocket Queens, and the game went three-handed when Tom Dobrilovic first doubled up Richard Corley (pocket Sevens > Ace-King) and then bust out in fourth when his Ace-King again failed to improve, and came second to Corley´s pocket Queens.

Sardor Gaziev enjoyed an incredible run of cards to stay alive in the tournament and cripple Jon Sorscher. First he cracked Sorscher´s Aces to reduce the former chip leader to just three Big Blinds and – after Sorscher had recovered with two double-ups of his own – Gaziev hit an open-ended straight on the River to crack Sorscher´s flopped two pairs (Aces and Jacks) and reduce him to just a handful of chips.

Richard Corley took the last of Jon Sorscher´s chips to take a 2.3 million -v- 1.2 million chip advantage into the heads-up, but Sardor Gaziev´s luck had only just started:

The final hand came soon after Sardor Gaziev had taken an advantage in the tournament. Richard Corley moved all-in with Q♥ 9♥ and was called by Gaziev, who had been dealt K♠ 9♠. The flop of K♥ 6♣ 5♦ put Gaziev firmly ahead in the hand, but the Turn card 10♣ gave Corley the chance of a gutshot straight. Fortunately for Gaziev, his luck held on the River (8♥), and he had picked up his first Borgata trophy and ninth Borgata cash in Open series tournaments.