Gaspard Gathers the Chips on Day 3 of WPT Borgata Championship

Jean Gaspard from Illinois enjoyed a sensational sequence of hands to close Day 3 of the WPT Borgata Championship with five times the average chip stack. 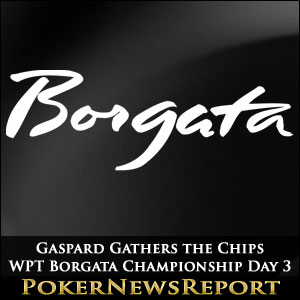 Jean Gaspard from Illinois enjoyed a sensational sequence of hands to close Day 3 of the WPT Borgata Championship with five times the average chip stack.

Day 3 of the WPT Borgata Championship saw the money bubble burst – as the returning field of 150 players was reduced to 31 players during eight levels of action – and Jean Gaspard become the new chip leader after an amazing sequence of hands.

Gaspard will go into Day 4 of the tournament with 5,464,000 chips – a lead of 2.5 million chips over his nearest competitor and nearly five times more than the average chip stack (1,186,450 chips). His lead over second-place Blake Bohn equates to more than 100 big blinds, and he will be a hard man to catch if his extraordinary good fortune continues.

The returning field of 150 players was reduced to 120 within two levels of action when play got underway on Day 3 of the WPT Borgata Championship. Among those to bust from the tournament without cashing were Russell Crane, Christopher Pagliaro and Day 1 chip leader Ben Bianco, whose A♠ J♣ failed to improve past Vincent Jacques´ 10♠ 10♣.

The unfortunate bubble boy was Tom Dobrilovic, who moved all-in on the flop of 7♦ 3♥ 2♠ with 7♥ 8♥ for top pair, and who was called by Scott Masters – who had been dealt J♥ J♣ for an overpair. The 5♣ added the chance of a gutshot straight to Dobrilovic´s hand, but the 10♥ blanked on the River to send him out of the tournament in 121st place.

Once the bubble had burst, players started to fall with accelerating regularity – with the primary recipient of busted player´s chips being Jean Gaspard. Gaspard first appeared on the radar when busting Daniel Alaimo in seventieth place A♣ J♠ > Q♦ J♥, and chipped up near to 2 million chips when eliminating Darlene Lee in sixty-sixth place with a Turned Jack-high straight.

Gaspard then stormed into the chip lead with the dual elimination of Neo Hoang (60th) and Qi Yao Chen (59th), when both players moved all-in with pocket Eights and could not improve past Gaspard´s pocket Jacks. Gaspard´s sensational sequence continued when he flopped an Ace-high flush to send Jamie Kerstetter to the rail in fifty-second place K♦ J♦ > K♥ J♣ and then Turned another Ace-Flush to eliminate James Frangoulidis A♣ J♣ > A♦ K♠ in forty-eighth spot.

World Champions are No Match for Gaspard on This Form

As the blinds rose to 8,000/16,000 (ante 2,000) in level 22 there was no stopping Jean Gaspard. The Illinois poker player flopped trip Nines to eliminate Scott Jackson in forty-fifth place, out-kicked Jason Deutsch A♣ Q♠ > K♦ Q♦ to send Deutsch to the rail in forty-second place and then out-kicked Wade Woelfel K♥ Q♥ > K♠ J♠ to bust Woelfel in forty-first.

WSOP Main Event Champion Ryan Riess was Jean Gaspard´s next victim – both players pairing their lower card on the flop (Riess A♣ J♦ – Gaspard K♣ Q♦), but Gaspard spiking the K♥ of the River to give him two pairs. Gaspard completed his sensational sequence by rivering two pairs to bust Aditya Agarwal  in thirty-fifth place and then flopping a set of Kings to eliminate Melad Marji in thirty-third place K♥ K♦ > A♥ Q♣.

Other than Jean Gaspard, thirty other players are still in with a hope – albeit a slim one – of taking down the $843,744 first prize for winning the WPT Borgata Championship. Blake Bohn survived a health scare and missed an hour of the action to finish the day with 2,951,000 chips, while Zo Karim bust Onofrio Reina in fortieth place 8♣ 8♦ > A♥ J♣ to move over 2 million chips, but made little progress thereafter to close the day with 2,280,000 chips.

Behind the three pace-setters, only ten players have more than a million chips, and six of the remaining thirty-one players have chip stacks of twenty big blinds or less – including the two former WPT Champions remaining in the field – Bobby Oboodi (371,000 chips) and Cornel Cimpan (358,000 chips).

Looking Ahead to Day 4 of the WPT Borgata Championship

Day 4 of the WPT Borgata Championship is scheduled to play down to a final table of six, and another long day could be in prospect. An interesting table draw sees Jean Gaspard and Blake Bohn drawn on the same table, but with the majority of the chips on Table 1 – which consists of 5 players featured in the top ten chip counts below: